Ok so anyone who knows me personally, or even if you’ve stumbled upon this blog from time to time….there’s a pretty overpowering chance that you understand that I’m a Justin Timberlake fan-girl and prior to, a Michael Jackson fan (thanks mom). So with that being said, you also understand that this little tidbit just sat all kinds of right with me. This my friends is the ultimate, this….is everything.

The Prince & The King of Pop ❤

(Although I’m not entirely sure if they’re correct, lol.)

When Michael Jackson first passed away, I remember the news saying there was a lot of unreleased music he had been either working on or hiding ;). And that he left them to his children to release when they felt was right, or to do as they wished. So now  years later after the release of his first posthumous album “This is it”, a new Michael Jackson album is soon to be released. In fact as of lately Michael Jackson supporting social media were hinting that it’d be sooner than later. Imagine my overly excited reaction when Justin Timberlake himself posted this…

Captioned: Stay Tuned…. and I was like Oh Holy Shit…I don’t know how to feel.

Read about the song’s history and

how this duet came to be HERE

The Michael Jackson version was first heard on the iheart radio music awards this past Thursday and I liked it (the audio left a little to be desired but the youtube clip I linked above sounds much better) and it makes sense once you learn that the original recording was from the 80’s and we all know 80’s vibes sounded like that. So I do like the original, but I adore the duet version, because it’s fun and beautiful and features two of my favorite human beings in music. It’s EPIC. It’s not over the top, it’s just fun, good music. A lot of critics say it could have easily been a single from Michael’s “Off The Wall” album. The song was just added Timberlake’s vocals (for the second verse) and reworked and con-temporized for today’s radio. Michael Jackson was an artist who always pushed the envelope, he always reinvented himself to keep people interested and keep relevant. But he never did so by failing to remain his signature self. The man who paved the way for many artists today, including the man who is deemed Prince of Pop/President of Pop by many;

Justin Timberlake is the perfect artist to have Michael Jackson do a duet with for his first single off  his new album. Their vocals blend flawlessly and if you don’t listen closely enough at times it’s almost hard to tell who’s who. Fortunately for me, I’m pro in all things Justin, so I have no problem, lol. It is very evident in Timberlake’s past albums and especially his current album The 20/20 Experience, that he is strongly influenced by Jackson and the legacy he’s left behind. From Timberlake’s dance moves, to his falsetto, the way he dresses, to the way he owns a stage, you can tell Jackson had a hand in making Timberlake the artist he is. But while that may be true, I think it’s safe to say Timberlake is making a legacy of his own, and is here to stay.

On Friday I heard the duet in my neighborhood deli and I instantly felt like it belonged on the radio, 80’s vibes are coming back people!  And I think Michael would be proud. “Love Never Felt So Good” has been on repeat ever since I heard it, it’s been stuck in my head and I’m not even mad about it. That’s the true song test isn’t it? When you find yourself humming a song and it doesn’t even bug you.

There is one small problem I have with the song and that’s the false advertising. Social Media had hyped it up saying Justin would be on the track and that it would be debuted at the awards. So that was the only reason I watched. And to be honest the music awards presented it all wrong. They said the song would be introduced by Usher. And basically it was LA Reid who introduced the song which was supported by Michael Jackson inspired dancers and a screen of Jackson stills while the song played and I was waiting to hear Justin and it never came. Then towards the second verse, Usher came out and danced. Usher, not Justin. That was a bit of a let down. So basically I was terribly confused.

*NSYNC performing with Jackson during his 30th Anniversary special

If you say Michael Jackson’s new single featuring Justin Timberlake is being debuted at the iheart radio music awards, then why they heck would you play the original solo version and have Usher come out instead. It makes no sense. I think being that Timberlake is on tour, and couldn’t be there to perform, the producers probably figured they’d play the original solo version and do a small tribute involving another Michael Jackson inspired artist; namely Usher. I get that. I also get that Michael’s original version deserved to be heard first. I just wish they would have advertised that.

I also wish there would be a suitable (and by suitable I mean EPIC) Michael Jackson tribute for once. Because ever since he passed, I still feel like I haven’t seen one. They have all been kinda low energy based. Which isn’t right since anything Michael Jackson related was and should always be high energy based including all the amazing artists he’s influenced. The bulk of his music is a party, it’s a good time. It’s meant to make you dance…I dare you to try and keep still when you hear the intro to Billie Jean, because I sure as hell can’t do it.

In a nutshell, Justin Timberlake has yet to fully be a part of an all star celebrity Michael Jackson Tribute so basically I’m saying that’s what all these tributes are missing. LOL. I mean hey if you’re gonna name him the Prince of Pop, call him the next Michael Jackson and hand him the Michael Jackson Video Vanguard Award at the 2013 VMA’s then he sure as hell deserves to be apart of the ultimate MJ tribute. So either he wasn’t asked or he couldn’t, (which I highly doubt he would turn down or take lightly.) I’m just waiting on Justin Timberlake to comment on this whole experience. Because I can only imagine it’s a dream come true for him. It’s definitely a dream come true for me!

Justin pays tribute to Michael Jackson on his own…

“Shake ya body (Down to the ground)”

How freakin’ good were they…

Hey does anyone remember that Celine Dion performance where she performed an Elvis song with Elvis himself and everyone was freaking out because he looked so real???…well plot twist it was a hologram but it was freakin’ amazing! 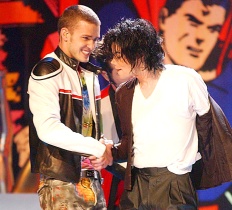 Well I think that’s what Justin needs to do, he needs to perform with hologram Michael Jackson and just blow the faces off everyone! Next award show…how’s about it Justin? I wouldn’t mind seeing you moonwalk, or do that signature mj leg kick, or pelvic thrust for that matter.

I cannot wait to hear what this album is gonna sound like, if

“Love Never Felt So Good” is any indication,

I think I’m looking at my newest summer playlist.

**I take no credit for any images or video footage/audio**

Listen to Justin talk to Ryan Seacrest about the whole process and how it was his honor to be on the track…and also listen up for an AMAZING first listen to Michael Jackson’s demo recording (in 1983) of the song…the demo is literally just Michael and a piano and in all it’s simplicity it is heart breakingly beautiful. Goosebumps are inevitable. Enjoy.