You know it’s funny just last night I was watching Michael Jackson’s “This Is It” film on tv…and I was like “Oh I know why they’re showing this, the album drops tomorrow.” I remember going to see the movie the fall after he died and just expecting to ball my eyes out. But I didn’t. Instead I rocked my “off the wall” t-shirt, sitting aside my best friend and my mom,  and just enjoying the music. And enjoying what would have been an incredible concert. “This Is It” consisted of all the rehearsal footage of Michael planning his London shows, just days before he died. And watching it last night I couldn’t help but smile and laugh at his personality. Some may say he’s strange and many will talk about the horrible things that were said about him in the media. But I only know him for his music, for his talent. And someone who comes across so genuine, so loving, so childlike, it doesn’t make sense for me to believe the rumors. So I choose not to. Michael was a true artist, working with everyone  and giving direction fairly. Saying things to guitarists like “I want you to hit your highest note, now’s your time to shine, and we’ll be right there with you.” Uttering God Bless You’s and giving thumbs up to all those involved. You could tell he was a perfectionist with a clear vision, but he knows his music and he was always right. But he also appeared shy and in a way unaware of his greatness. In an incredible “Billie Jean” rehearsal, he finishes with “Well at least we get a feel of it.” Like… are you kidding me, that song is epic and even in rehearsal, you performing it… is always going to be epic. As his dancers and crew members cheered loudly off stage for him, Michael bashfully shrugs his shoulders. I think that kind of level of pure fame, is enough to get to anyone. I only hope that he is at true peace now, and that he sees what a master of his craft he truly was and still is. RIP Michael. ❤ 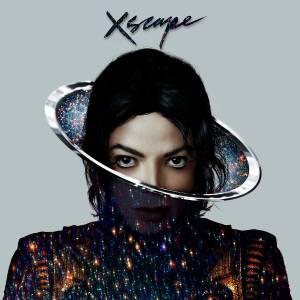 … (we already know how I feel about this song)

The audio is on fire.

Michael’s voice has that typical Jackson rasp accompanied by the heavy breaths he so typically adds in for effect, the song has a funky r&b feel good vibe to it. Very smooth. Definitely a favorite for me on the album so far…(it’s up there with “Dirty Diana” I could easily here this on the radio as a 2014 single, it’d fit fight in.)

Basically a song about a girl who did a guy wrong. lol

FUN! Jackson 5 vibes. Smooth Young Michael voice. The composition of this song is just flawless, each instrument, each sound just adds to it’s spunk. I love that funky drum and piano collaboration at the beginning and throughout. Seems to me like could have been up there with “Rock With You.” Would have made for a cool duet with Janet Jackson, vocally it would have been beautiful.

*Three songs in and I’m already loving it*

*I’m over here groovin’ and swayin’*

Funky Guitar (due to the use of synthesizers) and Michael’s voice…love the intro…makes for another instant favorite.

“I been through the desert on a “Horse With No Name” “… that was my initial thought, haha (and I was totally right [see: song description!])

The chorus is a fun sing along.

The vocals overall has this raw sound, sounds like this could be the demo, but that’s what makes it so good; makes it more organic.

5. Slave To The Rhythm (recorded during the “Dangerous” sessions)

There’s a build up in the beginning of a assortment of sounds; chains, drums, violin= slave symbolism.

A metaphorical dancer, being forced to obey a man’s needs and ignore her own.

Funky- (timbaland written all over it.)

Britney spears should duet this gem *cough cough* “Slave For You.”

I really enjoy his vocals in this song, he’s got this screech that blends with the rasp and it gives the song a sense of urgency which matches well with the urgency of the beat and of the dancer who is a slave to the rhythm

6. Do You Know Where Your Children Are

“he he” ‘s all up in this one! Wouldn’t be an MJ album without them!

Hip Hop, meets Rock and Roll, meets old school vibes all in one.

Sending a message. (It’s 10 pm, do you know where your children are?)

That’s the thing about Michael’s music, it has two genres…pop, feel good dance songs, then songs with a strong message. I think quite frankly in his heart he wanted to change the world, he wanted to make it a better place.

Well Michael you may be gone physically but your legacy lives on through your music, which continues to touch the lives of previous generations, this generation, and generations to come.

The title is kinda badass!

This song wasn’t an instant favorite for me (although its seriously creepin’ up on me), but I can definitely see this as a single. I can see the chorus catching on and having people belt it out. It screams “Cry Me River” vibes; even though it was recorded before Timberlake’s break up anthem, haha 😀

Also there is a part in the break where he hits a note and holds it, that makes me think of  the ending to “Earth Song.”

Is it weird that I could see Britney Spears on this track too?

This album is contemporary Michael. It’s still MJ and his raw talent with a bit of a 2014 spin to it. I think the producers set out to make something  that Michael would approve of. I’m interested to know what the Jackson family thinks and if they are proud. I do think that the Jackson family should have been involved with the production.

But I still think the album came out great! It’s a mixture of contemporary versions and original versions. It’s an amazing thing to hear the original versions. The songs range from feel good beats and meaningful lyrics that strive to send messages. There’s a lot of influence that could be chalked up to heart break. There’s a gentle darkness that gets masked by the upbeats beats and rhythms. But “Love Never Felt So Good” and “Loving You” breeze in and save us with their light. However, there is a variety of songs from all walks of Michael’s albums from 1983 to 1999, so it may seem like there is a slight continuity issue, in sound, in quality, or in vocals. But L.A. Reid tweeted that the producers who worked on this album sorted through 22 previously recorded songs and narrowed it down to 8.  I realize that many people have concerns about releasing music that is raw and fear that a perfectionist like Michael would frown upon it. But as L.A. Reid kindly put it, the demos were released solely for his fans who requested it. I know I was on youtube the minute Ryan Seacrest played a snippet of the “Love Never Felt So Good” demo, I was dying to just play it over and over again.  There’s just something so special about hearing the un-tampered with versions. It’s just Michael, and it’s a honor to listen to. To feel like you’re sitting across from him in the recording studio. Close your eyes, and you’ll feel it. It’s bitter sweet for Michael fans who have followed him through his career, because he isn’t here to deliver this album himself. And we have no way of knowing for sure if he would approve of it. But I think that given the simple fact that Michael even just put his voice on these tracks means something, and they should be heard, and honored. So I definitely think it’s worth a listen!

So as always, Michael Jackson, hats off sir.

And to all those involved, I think you did him proud.

“For the ultimate fan experience, XSCAPE is available in a Deluxe Edition, which includes all of the sourced Michael Jackson recordings as they existed in his archives as well as a DVD documentary featuring the producers discussing the making of XSCAPE. The duet version of “Love Never Felt So Good”, co-produced by Justin Timberlake, is also available on the Deluxe Edition.” [via michaeljackson.com]

“Love Never Felt So Good” is my top favorite, followed by “Chicago,” “Loving You” and “XScape.”

As I mentioned in my “Love Never Felt so Good” Review post, I am eager to see this thing play out and how they will work the duet. Will there be a music video? Will it ever be performed? I hear there’s this big Michael Jackson extravaganza happening at The Bill Board Awards this weekend and I am holding my breathe until I see for myself. Like I said I’m still waiting on greatness. And that greatness would include Justin Timberlake and Hologram Michael Jackson performing “Love Never Felt So Good” at the awards. But with Justin being on tour overseas…I don’t know if that will happen. However, he is on tour in Russia the 17th but his next show after isn’t until the 23rd, so it’s possible… AHHHHHHH….ok  ok let me not get my hopes up too high. I’ve learned my lesson with that bogus 30 second *NSYNC reunion. 😉 We’ll just have to wait and see on Sunday. 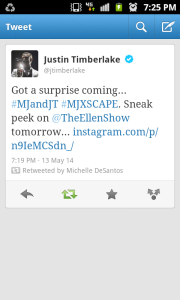 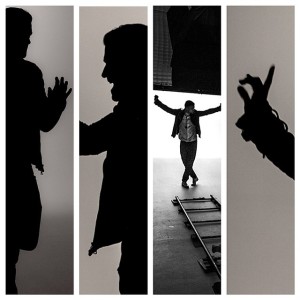 accompanied by this photo…um ahhhhh 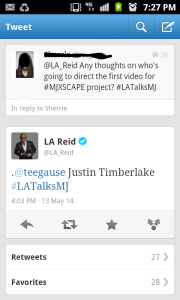 Um Justin, I think the cat’s out of the back…hold on wait a minute…let me go pick my jaw up off the floor ❤

Michael Jackson is set to unleash World Premiere Experience and “make history” at The 2014 Bill Board Music Awards…which airs LIVE from Vegas this Sunday May 18th on ABC at 8 pm. Yahoo will be streaming the red carpet. 🙂 Tune in!

For more information on Xscape

Shout out to this being my 200th post here on wordpress!