Download on iTunes, find on Amazon, or in Walmart, etc.

I realize this is quite late. But better late than never, right? 😉

“I think the entire compilation is a really good overall encasing of what *NSYNC was known for; talent and entertainment and for basically making all us young girls giddy as hell! It’s a serious throwback and we 20 something year olds have basically named ourselves the nostalgia generation. So if this fits you, and you’re a hardcore *NSYNC fan, buy it!”- Michelle Leigh Writes

It all started with a tweet. Isn’t that always the case? We are living in the new digital age. R.I.P sweet typewriters, dell computers, aim, and let’s face it…aol.com. Anyway, getting back to the good stuff. On July 28th my jaw dropped for a brief…VERY brief second when 1/5 of *NSYNC; Lance Bass sent the tweet pictured below.

A NEW *NSYNC album. And only ONE day notice! But I need to dig out my t-shirt and my bobble heads and…. BUT HOW CAN YOU DO SUCH A THING to a MEGA Fangirl! 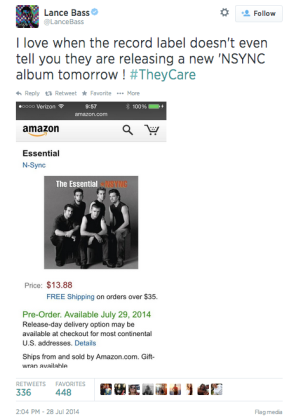 In that minor second of happy panic I knew it was too good to be true.

Oh. It’s just another form of a greatest hits album. So it’s not really “New” is it?

Fangirl hearts breaking everywhere. EVERY.WHERE. Mine amongst the many.

*Although I have to admit the faux *NSYNC reunion rumors are getting easier to ignore, it’s happened just too many times, I won’t believe it until I see it with my own eyes!

I took my slight frustration to my Facebook; as we all do. Don’t lie. You do it too.

Omg my inner 90’s self is so pissed…Dear Media, *NSYNC did NOT “drop a new album” none of the guys knew about it AND there’s no new music on it!

So what’s the deal with this album? *NSYNC members had no clue this was being released. Why was the label being so secretive? Well after Lance’s tweet, I googled my ass off…naturally. And checked my *NSYNC related sources and by sources I mean I stalked the guys social media accounts and found that the “new” album was a compilation of old hits, some unreleased/unreleased commercially tracks, some fun collabs and covers, soundtrack contributions and some random tracks that were released as side projects. [AKA the Britney Spears/*NSYNC McDonalds CD] 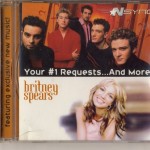 Lance did a whole interview about the album release on his radio show and he basically won me over! Listen to it HERE!

By the way take my Facebook anger with a grain of salt. I wasn’t angry at the band or their music. I LOVE their music. I love them! I was just frustrated that no one knew about this album. The guys should have been notified it is their voices, and some of the tracks Sony used on this CD were actually written by members of the band. And I’m not gonna lie even though I knew it wasn’t gonna happen, I was secretly hoping for real deal 2014 music. Not to say that the unreleased tracks aren’t boss. Cuz they are. But being the psycho fan I am, I pretty much heard 99% of the album (unreleased tracks and all) back in the 1996-2002 time period, thanks to Lime Wire.

Initially my first thought was well I have almost all of these songs; I own all their albums and have most of the other singles thanks to Lime Wire again. (I was a kid, please don’t punish me…free music is free music.) But when the thought of not buying the CD came into my mind, my 90’s fan girl grilled me and put her hands on her hips, tapping her foot at me. She was pissed. So naturally I gave the album a listen on YouTube. [GOD I LOVE YOUTUBE!] And I basically fell in love. So a month later and here we are. “New”/ Old *NSYNC album playing in my ears. I guess I’m growing up a little since I didn’t run out and get it right away, I waited it out…. 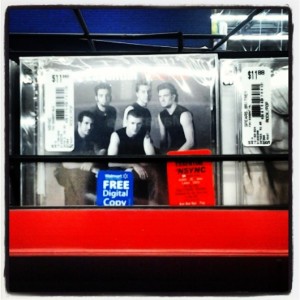 But I was up in Pennsylvania on vacation and consciously sought out a nearby Walmart and bought my copy. (So there’s that.) I guess there are some things I just can’t help. It was the right thing to do. Here’s how it went.

My Brother: What’d you get?

My Brother: (gives me a face) So you bought a cd you already have all the songs to?

Me: Oh I do. I love cds. There are some people that I just feel like I need to own their CD.”

I gotta say new album or not, *NSYNC looked nice back up on a shelf….right next to Ms. Britney Spears. The way it should be.

Band member Lance Bass said of the album on his radio show, Dirty Pop: “There’s a lot of these songs I don’t think I’ve ever heard, I remember recording them but I’ve never heard them before, so I’m interested in just hearing them.” JC Chasez tweeted about the album’s release, stating: “I had the strangest dream last night that some old friends and I had a top 10 record on iTunes. Crazy right…” “Chris Kirkpatrick said of the album; “It’s great to release some of the songs that had never made a record before! I’m glad our long time fans get some new music!” Joey Fatone also said; “Pretty interesting this album comes out, which I really had no idea, and it’s in the top of Amazon and iTunes… we owe it to our fans. Thank you.” –Via Wikipedia

And yet Justin Timberlake has yet to comment. But instead of getting all angry fan girl on him, I will just chalk that up to the fact that homeboy needs to learn how to tweet for himself more. I hate seeing –Team JT (no offense Team JT, we do appreciate the updates).

The world is ready for a REAL reunion, give the people what they want. 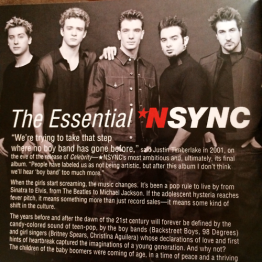 Chris kills it in “The Lion Sleeps Tonight.”

*NSYNC were vocalists…always knew it, always believed it, still do!

The Essential *NSYNC is boss, such good vibes listening to it.

There is something about listening to *NSYNC and hearing young Justin Timberlake vocals that transports me back to the amazingness of the 90’s and my childhood and how everything was just so much easier. Memories are connected to those songs. And hearing those voices again just reminds me of what made me fall in love with them in the first place. It’s a feeling I can’t seem to let go of.

*Some of my favorites*

(not including the original *NSYNC hits and awesomeness…

we’ve all heard them and we already know we love them!)

Are You Gonna Be There

If I’m Not The One

More Than A Feeling (Boston Cover)

Best Of My Life

On The Line (seriously though how GOOD is that movie tho!)

That Girl (Will Never Be Mine)

*NSYNC may have been known as a boy band, but they started off as an A Capella group. If you really take the time to listen to their self titled debut album, you will see that their vocals are a lot more clear and there is less room for fancy background music and beats and you realize they actually can sing. They all harmonize so well together, and each shine in their own tone of voice, creating a nice dynamic group. It was a beautiful thing to see vocals that fell through the crack back then, like “I Thought She Knew,” “Sailing,” and “Selfish,” be given new life on this album. I think the entire compilation is a really good overall encasing of what *NSYNC was known for; talent and entertainment and for basically making all us young girls giddy as hell! It’s a serious throwback and we 20 something year olds have basically named ourselves the nostalgia generation. So if this fits you, and you’re a hardcore *NSYNC fan, buy it! And if you’re not, buy it anyway…maybe after hearing such a great selection of songs; it’ll turn you into a fan. Crazier things have happened.

However, do I think they missed a few key songs? But of course.

Just a few that came to mind.

rld loved it. Songs like “Bye Bye Bye” and “It’s Gonna Be Me” made us all sing at the top of our lungs and dance those synchronized dance moves we all know and love. But their third and final album (as a current band) was a play on their new found fame, with songs like “POP” and “Gone” we saw the boys had turned to men and they wanted to be recognized as such. And to be recognized as actual artists. Hence….Justin Timberlake’s soon to be exit from the group, breaking teenage/pre-teenage hearts everywhere.

For me, *NSYNC is always going to be golden. They were such a crucial part of a golden era and I loved everything they’ve ever put out…even the album they had no clue about. It’s a great 2 disc, 34 song track list,!!!!34!!!! ($11.88 at Walmart…2 discs, 34 songs, I’ve bought many cds in my life and I thought that was a steal!) The album pays homage to their vocals and gives us all a little hope that one day it may just actually happen. If you ask me I think if the label was looking for some kind of validation from the fans as to whether or not an *NSYNC album would do well on today’s charts. Well I think you got your answer.

The Essential *NSYNC was released July 29th. And was quite beautifully received by fans, via twitter people praised their favorite old tracks and newly released favorites. It was even in the top 10 albums on iTunes, next to new generation boy bands. Fangirls got you *NSYNC. Always. Believe in us. We believe in you. Come back for real and you’ll see. 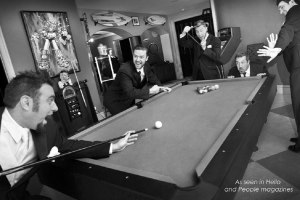 Ugh these dang reviews always turn into a love affair of me pouring my guts out to you…so let’s wrap this up before I think of more to say. In a nutshell, 90’s girls will never forget and never let you go…accept that *NSYNC. Accept that Justin Timberlake. And tweet me back will ya? #HowRude 😉

If you missed my usual lyrics sharing I usually do in my album reviews…share some of your favs with me in the comments below, let’s fangirl together!

“The album pays homage to their vocals and gives us all a little hope that one day it may just actually happen. If you ask me I think if the label was looking for some kind of validation from the fans as to whether or not an *NSYNC album would do well on today’s charts. Well I think you got your answer.”- Michelle Leigh Writes

One thought on “The Essential *NSYNC Album Review”