Sage hurriedly walks up to a small house with a white picket fence. The American Dream on display for all to see. Pushing the gate she proceeds to the door way. As she lifts her hand to ring the door bell, she hears a female voice screaming;

Followed by what one can only describe as an abnormally loud crash.

She rushes in, struck with fear, as the screaming intensifies.

Sage awakes from her nightmare, in a cold sweat, her heart pounding. The morning casts a slight ray of sun creeping through the dingy yellowed curtains. The sun serving as a daunting reminder that Sage has to endure yet another day of replaying the horrible incident she’s been running from.

As she grabs her head she tries to lie as still as possible. It continues pounding and her eyes feel heavy. It’s safe to say that Sage didn’t get that much sleep last night. She is haunted.

She scans the room in a blurry fog, as her eyes strive to focus.

Her motel room is in disarray and smells of old moth balls. Slowly she sits up in bed and makes her way to the bathroom splashing water on her face, she is soon greeted with a small knock on her motel room door.

She looks in her mirror at her reflection and sighs heavily.

She walks to the door, and figuring it is Charlie she reaches to open it, but upon hearing voices she halts.

“Excuse me officer?” She hears the familiar male voice of her recent companion.

“Hello Sir, is this your room?” the officer asks turning to face Charlie.

“Are you sharing it with anybody?”

“Nope just me. Can I help you with something?” Charlie asks calm and collectively.

“Why yes, we are looking for a possible suspect in a murder case.”

“A murder? Well Sir I am very sorry to hear that.”

“Aren’t we all. We have reason to believe we are looking for a female suspect, mid to late twenties, yay high (he says showing a height with his hand) dark hair; possibly brown or black, tanned complexion…. She was seen fleeing the scene late last night. Have you seen anyone matching that description come through here?”

Sage’s face fills with fear, her eyes widen, her heart begins to pound.

Who’s to say this guy can be trusted. He doesn’t owe me a thing? What if he gives me up right now, she thinks.

“No Sir, I can’t say that I have. I haven’t seen much of anybody come through here,” Charlie answers filled with calm poise.

Sage sighs in relief, allowing her breathing to exist yet again. She stands up slowly and quietly and peeks out the peephole to see Charlie and the officer.

“What about the room over…vacant?”

“Um yea I think so. Heard a car on my way to the vending machine, might have ran into town.”

“And the hotel manager, he or she ever around?”

“Maybe mystery guest in room 7 needed a lift somewhere. The way I see it- if I worked here, I’d spend as little time as possible actually in this place. Kinda gives me the creeps. I’m just on a brief stop in between some construction work, looking to move on real soon.”

Charlie hands the officer what appears to be a business card.

The officer looks it over and nods.

“Well. Please excuse the interruption. You have a nice day now.”

Charlie nods and watches as the officer walks off. 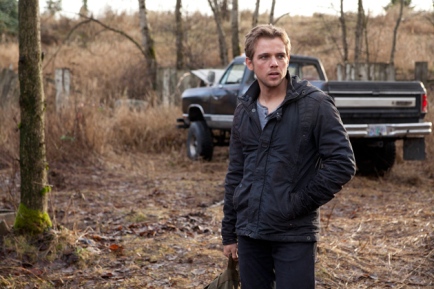 Sage looks on confused at how well Charlie handled that.

Charlie turns toward the door. Before he could knock, it opens for him, he walks in, finding Sage standing behind the door.

“Yea.” She says her eyes slighltly filling up.

“They have a description. They know what I look like.”

Sage begins to let the tears fall freely. As her life and everything she’s ever dreamed of being slowly feels like it’s being ripped away from her.

Her breathing becomes sporadic as she begins gasping for air.

Charlie looks on nervously rushing to her side.

“Ok hey. Hey look at me. It’s ok. You’re gonna be ok. I’m gonna make sure of it. You’re just having a panic attack. It’s going to pass. Just look at me. Ok? Stay looking at me, right here,” he says points to his eyes.

Charlie continues coaching Sage through her panic as he grips onto her shoulders to steady her, rubbing them as an occasional calming technique. Sage’s hands hold onto his inner arms in reciprocation.

She begins to calm down as her gaze continues to lock onto Charlie’s.

His face calm, and kind and somehow oddly peaceful.

Sage realizes her nails are digging into Charlie’s muscular arms, as she had felt she was holding onto him for dear life.

Her eyes gaze elsewhere, breaking her trance; a mixture of panic and attraction for this new found confidant.

“I’m sorry,” she says releasing him and backing away.

Charlie’s hands drop from her face in response. He can sense she’s pulling away.

“Don’t sweat it. It happens. Did it pass? Are you feeling better?”

“Yes. Thank you,” she says looking at him as her arms fold over her chest.

“Sure,” he says looking at her with that familiar hidden flirtation.

It isn’t blatantly obvious but there is something causing Sage’s heart to flutter and her stomach to flip in a way that she actually finds oddly satisfying.

“Look I know you’re scared. That was a close call. But at least now you have some beneficial information.”

“Yea. But see the good news is you have an advantage- you’re not the only 20 something, brown eyed brunette with a tanned complexion.”

“So with that being said- you know they know-so now you can change accordingly.”

“Alter your appearance,” He says casually.

Sage looks at him.

“That would require money and me leaving this motel. Two things of which I am not too sure about.”

“Well I have money and a car…it’s best we keep moving, get ahead of the investigaton while we can.”

“Why do I feel like you’ve been in this situation before?”

“Because in some way…I have.”

“You’ve been on the run before?”

“Let’s just say I watch a lot of cop and crime shows.”

“Sure. If that’s your story,” she smirks and laughs slightly, her eyes sparkingly in his direction.

Charlie looks over at her matching her flirtation with his glance and a chuckle.

“So what’s the plan? I dye my hair and get some new clothes and just keep running? Eventually they have to catch me.”

“Not if we do it right. But in order for you to allow me to help you- You have to trust me. So…do you?”

“I don’t know. What I do know is that you’ve saved my ass more than I can count in the last 24 hours.”

“It was my pleasure,” he says smirking.

“I think that if you’re willing to risk it to help me, I’d be a fool not to take it…but with that being said in full disclosure, knowing what you know now about what happened. Do you trust me?”

“I don’t know either. But I want to. And that’s enough for me to want to help you.”

They exchange glances and an understanding.

“I’m gonna go grab my stuff and start up the get away car,” he chuckles.

Sage laughs and then catches herself.

Her gaze drifting as the screaming rings in her ears yet again.

“Hey…look I don’t judge people. Something tells me you did what you had to do.”

“Why does it feel so bad then?” she says looking up at Charlie.

Sage ponders his words as he leaves the room.

*I do not take credit for any images or gifs used in my edits or otherwise.*