Every February it dawns on me…just a number of years ago I was in one of the most desired places in the world Paris, France. In 2009 I went on a week and a half trip to France with my high school. It’s still to this day the only plan ride I’ve ever taken in my life, but hey when you go, you should go big right?

The first day was long and rainy, and combined with  jet lag, the walking tour was hellish. We came off a 6 hour flight and hit the ground running…visiting sight after sight. We were all cold, tired and hungry. And I think it’s safe to say we all just wanted to go home. Paris wasn’t agreeing with us…but once we all settled in…the magic soon began.

I have this box full of France momentos; train metro-cards, photos, the itinerary we followed, even a euro coin… all just little things I keep to remind me, of such a pivotal trip. It’s not every day you get to experience France with some of your good friends.

Paris is the type of place, you dream about, the type of place you experience through television and movies. But for me it was tangible. I could feel it, I could taste it, I could see it, in all it’s glory. Of course my single heart took a small hit when we went to see the Eiffel Tower, on Valentine’s Day… I mean if that’s just not a slap in the face I don’t know what is, LOL. First we actually saw it in the day time then went back at night for a boat ride, and watched as they lit the tower. Next, we got to go in and take the scary but magical glass elevator all the way to the top…  nothing stands in the way of the awe you feel being at the top of the tower looking out over the city.

The lights twinkling about will make you weak in the knees. Naturally proposals were the talk of us youngings as some of us saw happy local girls agreeing to wed. That’s something huh? To be in some strange way a part of a couples history. 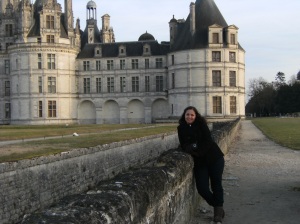 It’s going to be 5 years since my trip, and I still think back to it often. It was til this day, one of the most amazing experiences in my life. Of course every trip has it’s flaws, and the beauty that is France is no exception.

Because we were such a large “American” tourist group, the hotels we stayed at were a little too accommodating in the food department. So by the 4th or 5th night, we were all really sick of chicken, and potatoes, LOL. The main thing I can say is that we got to experience Paris on our own as well. We were able to roam the streets and then had an assigned meeting spot that we would have to be back at, for a certain time. This was the most exciting part because it allowed us time to really drink in the city. My friends and I would go off and wander on our own terms then meet up with other wanderers and gradually make our way

back to our big group to continue our schedule.

We got to see Notre Dame, The Eiffel Tower, The Louvre; The Mona Lisa, The beaches of Normandy, many many many castles, many museums, many other churches, and got to sit in on a wine cellar presentation. Now I know what your thinking, it’s France right and in France the drinking age is what loosely anywhere from 14-18? Well let’s just say us “American” kids weren’t exactly allowed to participate in the wine tastings, but well maybe we found a way….hey maybe that’s when my wine obsession really began? Hmmm? 😉 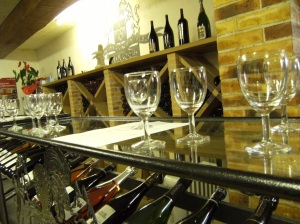 France is an amazing place. We went to a bowling alley/arcade, ate dinner in a “cave”, and had a dance off with some kids from the UK…it’s safe to say U-S-A won 😉 And in all that time, memories upon memories where being made. Pictures are always there to remind us, but memories hold our own moving images. We commit certain things to memory in such a way that it allows us to relive it whenever we want.

I know you’ve heard the rumors, how

the French hate Americans, and in my experience, well that would be true! LOL. When you have a giant group of kids come into your restaurant and only one or two speak minimal french, I guess you tend to get pissed. But it’s not to say that every run in was bad, we met some locals that were very welcoming. I think it’s all about how you carry yourself. If I were to go back today, on my own just to explore at my leisure, I think the experience would be even greater. I’m not the same person I was 5 years ago, I mean I still have all the same values, (and probably all the same quirks) but I’m just a little more mature, I’ve done a little growing up… (or at least I hope I have…LOL)

So France.. Honey, Sweetie, I do hope we meet again…and in the meantime…

Thanks for the memories… 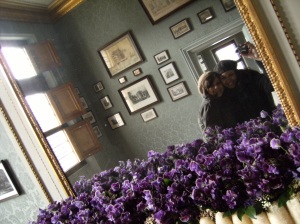 I had to….here’s a random music  selection from my “Paris Playlist” I made for the flight:

Enjoy and Stay warm folks, “Nemo’s” coming in like a tiger!