Hey Everyone… *HOW YOU DOIN’*

So I’ve always been a big F.R.I.E.N.D.S fan, I could watch it all day everyday and pretty much quote every episode, lol. And I’ve always had a fascination with the friends favorite hangout “Central Perk.” 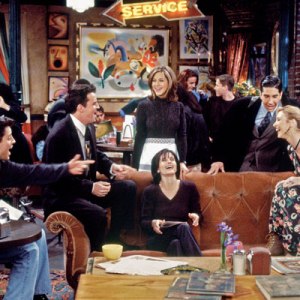 always been a tv nerd dream of mine to sit on that big orange couch on the set of F.R.I.E.N.D.S with a big ole mug of coffee in my hand. It’s such a shame I never got to visit the set in real life, it would have been an amazing experience. Because to me, it was and still is an iconic show, one that can never be matched. There is a certain simplicity about it, it makes you laugh, makes you cry, there are first loves, and breakups, but it mirrors real life. People don’t always have the right words to say, and often times jokes are made during times of tragedy because it makes it easier to cope, that’s what friends is about, the root of it all is the uplifting comedy. And it’s a beautiful thing.

So for a while I had been toying around with the idea of having a central perk themed party, I’ve seen a few examples of it online, and I was eager to make it happen. So I did! Take a look at some of the pics, including decor, menu, guest list and even entertainment! 😉

My goal was to bring Central Perk and the spirit of F.r.i.e.n.d.s into my very own living room.

A number of years ago, my best friend lent me the friends soundtrack to burn, so to set the mood I played the theme song while everyone arrived, it was pretty cool because there’s the long version of the song and towards the end there are snippets of conversations from the show between the characters, so it was a good ambiance setter, made it feel like they were right there with us! 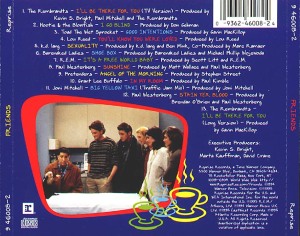 I put my Rachel game face on, and rocked a waitress apron and coffee pot to play the role 😉 Rachel Green will forever be my first girl crush lol 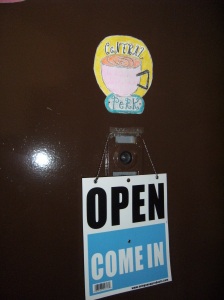 Found this adorable Phoebe Cartoon online so I decided it’d be cute to post some flyers around announcing a special Phoebe Buffay performance!

Phoebe’s Corner… you got a mic, a guitar, and good ole smelly cat haha (props to my friend Lauren’s little niece for the cat lend out haha)

I tend to have my big gatherings in July for some reason, so I opted to do the iced versions! We also had the added addition and crowd favorite; Fruit Kabobs!

Signature big mugs and wait a second is that “Be your own Windkeeper” Gosh I mean Monica, and Phoebe raved about it so much I thought I’d buy a copy 😉 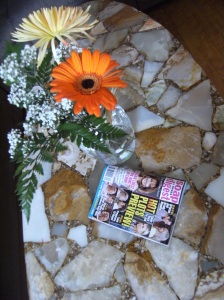 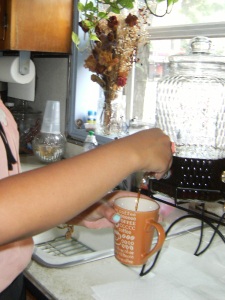 Look at that spread… we got muffins, donut sticks, scones, an apple horseshoe, munchkins, coffee cake, and croissants!

Gotta have your assortments of Jelly… apricot, red raspberry, and grape 😀 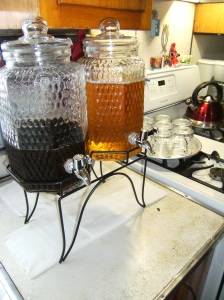 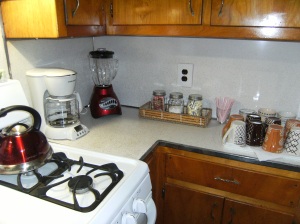 Coffee Making Station!…. we even made some frozen hot chocolate which is out of this world… just a few packs of hot cocoa mix, some milk, and ice ice ice and blend blend blend til frothy! You’ll love it!

As party favors everyone got to go home with a mug! (p.s. i searched and searched for big mugs like the ones they use in the show, but i couldn’t find any! and I only had 2 in my closet so they were for show, so i found these coffee themed mugs that i thought were really cute!) 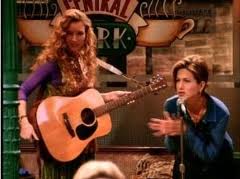 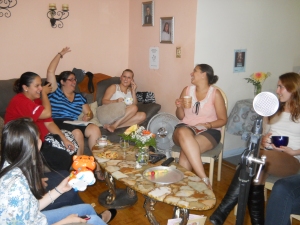 View from the stage 😉

My partner in planning, thanks mom ❤ 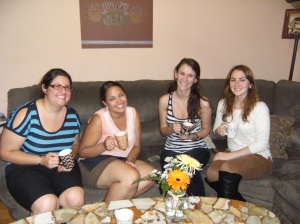 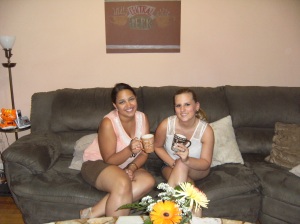 I also posted a few other flyers around of “Phoebe Buffay and the Smelly Cat Ball” I found it online and it looked like a tour poster and I thought it was too cute!

And to round it out a little premiere of the “Smelly Cat” music video ;)…. followed by an after party of friends episodes with my friends buff Lauren ❤

After all the planning it was a really great experience to share my Central Perk and Friends infatuation (lol) with some amazing friends of my own! Friends is a show that should have never ended…but will live on through me and all my other friends buffs… and well through reruns lol….in the wise words of Rachel Green…

P.S. SHOUT OUT to this being my 100th POST here on michelleleighwrites!!!! yayyyy! gotta say I’m pretty proud of myself for keeping this up, I may not be able to post as frequently as I’d like, but at least I’m sticking with it!

*and if you’re a Friends fan like me, try having a central perk party of your own for you and your friends 😀