“Women need to be more confident in who they are. It used to be the men had to be gentlemen in order to get one girl’s attention, and now it’s like reversed. Now it’s like they’re disrespectful and then they’re just kind of there, it’s crazy to me. That’s why my girls are my everything, and we’re not afraid to just be confident in who we are, and if a gentlemen can’t handle that…then that’s not my problem.”

Selena Gomez… an actress. a singer. and from what I can see a Disney star that is graciously embracing maturity. We’ve all seen the whole Disney star gone a rye time after time…in fact that very thing has been said recently about Miley Cyrus and her latest image change, yea let’s stick with that…image change. Nothing more, nothing less. I am staying out of that, lol. 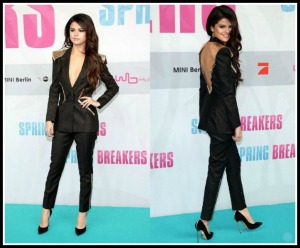 Anyhow, I am not writing this because I am a massive fan of Selena, although I am totally obsessed with her new single “Come & Get It,” it’s my jam! But I am honoring something that I feel has been misplaced in the eyes of fame these days and the young people who possess it.

It seems that often when young stars start off in a very sheltered environment, for example Disney… when they make that break from it, they tend to go a little crazy, in efforts to rebel, and be seen differently from their once squeaky clean image.

In any event she is also sassy, which I think is a trait every girl should embody. But just a pinch, not over done, where it makes people assume your bitchy. And by sassy I mean how she’s handled her very public, very personal breakup from Justin Bieber. Celebrities

sometimes do everything in their power to avoid those situations, and I’m sure she’s done her fair share of that. But she has also made her little digs when the time was right, in a subtle way. For instance in interviews, or twitter/instagram pics, and my favorite singing a cover of Justin Timberlake’s “Cry me a River,” it’s the celebrity breakup rite of passage! haha. And she’s so awesome, because she’s doing her thing with her girls! I think that after your heart gets broken all you should do is focus on you and worry about how to make yourself happy. And move on from the assholes that aren’t worth your time!  And I’m sorry but just because a girl is classy and carries herself with respect, doesn’t mean that she doesn’t deserve to speak her mind. Even if it is publicly…because guess what, guys like to do it all the time, they talk crap, only difference is they do it in a more obvious and cruel way. Girls know how to dish out a dig with the most subtle yet classiest of ways. Do you girl! 😉

There’s also another reason I admire Ms. Gomez. She recently celebrated her 21st

birthday and while many young stars choose to get sloppy drunk and make a fool of themselves. Selena celebrated hers in style. She had a birthday filled week. First she made a Birthday music video with a bunch of friends. Then she went to a big L.A. dinner and lastly she rounded it out with a New York Gypsy themed party bus extravaganza, with tons of celebrity friends as guests. Now mind you that may come off as a little much for a classy, sweet, innocent young woman, but for someone who is never exploited by paparazzi for excessive (under-aged) drinking or doing drugs, or promiscuity, you can understand she is legally allowed to enjoy herself and drink away. And from the pictures you can tell she partied and enjoyed but did so responsibly. And she even worked the next day as she appeared that morning on “On air with Ryan Seacrest,” and on “The Tonight Show with Jay Leno” and revealed her first legal drink of choice!

So that’s my point…when a once Disney star feels the need to break free, and grow up, and embrace their sexuality there are better ways to do so then just rebelling by acting out.  And Selena has graciously found the formula. She knows she is still

seen as a role model and chooses to honor that, even tough she is allowing herself to mature at a proper rate.

Even with her recent break out into more mature acting roles, Selena had chose to take a role as a

young impressionable girl named “Faith” in this past March’s, “Spring Breakers.” The amount of publicity this movie received was rather extensive due to it’s topic and due to the bikini posters floating about. And although I haven’t seen the film, I’ve heard mixed reviews. But never the less even though the film is said to involve drugs, drinking, sex, and violence, Selena chose to take the role in order to give herself new acting experience.

However, Selena’s character was said to be the tamest of all the girls. Selena was also kind enough to advise parents of her younger fans, not to allow them to see the film. I thought the way she handled that was really brave

and really spot on. I mean she can’t solely live her life for the benefit of others, and stay a Disney clean teen for life. She is growing up and in need of finding new experiences to find herself. But I think she values where she came from and who her younger fan base is, and she takes care of them by being a responsible role model.

Same goes for her music, her latest singles include “Come & Get It”, and “Slow Down”  which proves her music is maturing along with her, and so are it’s messages.  It’s all about her growing up. There are ways of being sexy without being deemed a slut, and I think regardless of how she dresses, the messages behind her seductive songs, the movies she makes, or the ups and downs of her personal life, she is still one of the most relatable yet one of the few classy girls left out there today. 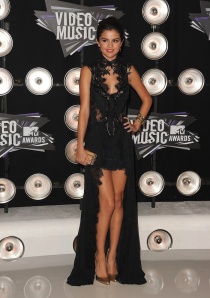 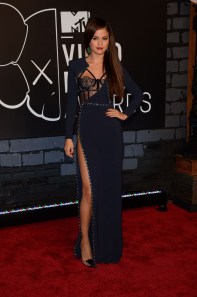 One thought on “Selena Gomez; A classy girl, in the trashy world of fame”