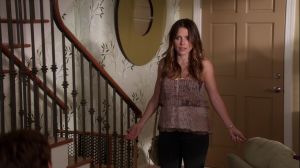 Lexie: What are you doing here? How did you get in?

Kelly: I can be very persuasive.

Lexie: Well I think you should leave.

Kelly: You would think that.

Lexie: Why are you even here? Don’t you have a meeting with your lawyer… that you’re supposed to be at right now?

Kelly: Yea. But I only arranged that, so that little Carter would be otherwise occupied. I just thought it’d be nice to have you all to myself.

Lexie reaches for her phone

Kelly: Don’t. (pulls out a gun from her purse)

Kelly: Now. I’m not in the habit of using violence to get my way…

Lexie: Could of fooled me.

Lexie: What do you want? 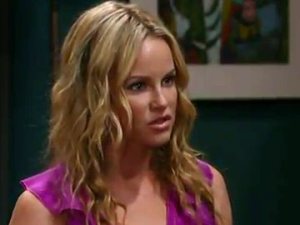 Kelly: I was getting there, if you’d shut the hell up, and let me finish…

Kelly: I won’t hurt you. That’s not what I’m hear for.

Lexie: Then why bring a gun at all.

Kelly: For starters, your a mobsters daughter. If you think I was coming to see you not prepared you are delusional. And secondly because I knew you’d try and make me leave or try to get out of here somehow, and frankly, I have somethings to say to you. And you’re gonna listen. And if you don’t well then…. (she points to the gun)

Lexie: Say what you have to say. (crosses her arms)

Kelly: Good. Have a seat.

Lexie: Oh can I…this is my house. (huffs and sits)

Kelly: Watch it. I’m the one with the weapon. 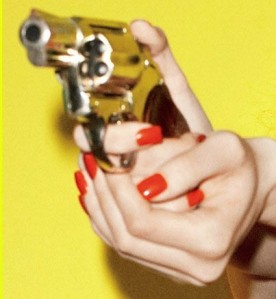 Lexie: Have you ever shot a gun? 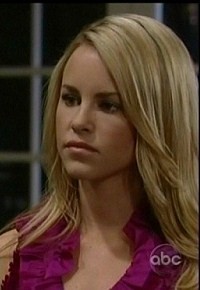 Kelly: Nope, but there’s a first time for everything, right? (aims the gun at Lexie and pretends to shoot it making the noise, Lexie jumps) Can’t be that hard right? (laughs) Wow, the mob princess is actually scared of little ole me. What a rush. You know you and Carter were definatley onto something here. The adrenaline of just holding this gun. Ugh, it’s just so fun! And I bet sneaking around and having sex on every available surface with my husband was fun too.

Lexie: There’s nothing fun about taking someone’s life…no matter what the circumstance.

Kelly: Oh and you would know wouldn’t you? Because your a criminal.

Lexie: I don’t disagree with you. I’m not exactly proud of the life I’ve led.

Kelly: And you dragged Carter along with you.

Kelly: Do you know what’s it’s like to have your husband tell you he doesn’t love you anymore….Do you? To know that he’s been cheating on you with someone who looks like a devil in disguise. I hope you can live with the guilt of breaking up a family.

Lexie: Fall in love with him.

Kelly: But you did, didn’t you?

Lexie: Yes. But don’t be too quick to blame me. You cheated on him first.

Kelly glares at her

Lexie: Oh what? You didn’t think I knew. Well I know. I know everything.

Kelly: Mistakes can be rectified. And I’m not willing to give up on him.

Lexie: Well sorry to break it to you, but he’s given up on you…a long time ago, actually.

Kelly: Shut up! My god, I’m so sick and tired of my past being thrown in my face. I’m a different person now.

Lexie: Naturally, now your a criminal.

Kelly: I love my husband. And I’d do anything to keep him.

Lexie: And what is it that you want from me?

Kelly: I want you to leave him.

Lexie looks at her

Kelly: And I want you to do it tonight.

Lexie: Or what? You’re gonna kill me?

Lexie: And what… you think that by killing me, Carter’s just going to magically fall back into a relationship with you. Look at you… you’re a psycho. And you’re the delusional one if you think you’re getting out of here, scott free.

Kelly: I got in here didn’t I? And as for Carter, he’ll never have to know it was me.

Lexie: And you think shooting me isn’t going to draw attention?

Kelly: It’s a silent shot. I thought of it all,  Call him, now…(hands her the phone)

Lexie: And what would you like me to say?

Kelly: Well then make it convincing.

Lexie: He knows how much I love him, nothings going to convince him…it doesn’t make any sense.

Kelly: Well that’s not my problem. Now call him.

Lexie suddenly feels faint and the room begins to spin

Lexie rushes to the bathroom and throws up

Kelly runs after and sighs

Kelly: Really? for someone who kills people for a living, your a little too gun shy.

Lexie: It isn’t that.

Kelly: Oh then what is it?

Lexie: Nothing. Probably just a bug.

Kelly: Well then get up. Clean yourself up and get some water, then we’ll make the call.

Lexie gets up off the floor. She washes her face, and rinses her mouth out. She slowly walks toward the kitchen. And grabs a glass. Kelly close in tote.

Lexie: Can I get an aspirin?

Kelly turns her back for a second 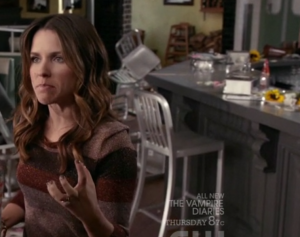 Lexie takes her glass and smashes it over Kelly’s head, Kelly falls to the ground

Lexie kneels near her

Lexie: Rule number one…never turn your back to your hostage. Rookie mistake.

Lexie gets up and grabs some rope and ties Kelly’s legs and hands. 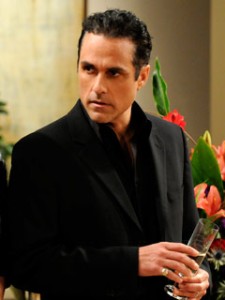 Carter: I think Skully’s looking to make his next move… and I think it may have something to do with Lexie.

Reeves: What do you mean…start from the beginning, don’t you leave a damn thing out.

Carter: I dropped Lexie home, and I got a phone call from an unmarked number. I answered and I didn’t recognize the voice until after he hung up.

Reeves: Remember that cell phone I told you to keep tabs on.

Reeves: Pull up all recorded material from the past hour.

Carter’s conversation with Skully is heard

Carter stares at Reeves in shock

Carter: I’m gonna ignore the fact that you’ve been tracking my phone (he says sternly)…and ask you, is that Skully?

Carter: So if he’s not concerned with me, that most likely means he still has no clue I’m his son.

Reeves: It’s hard to say. He’s the master of mind games. But what makes you think he’s referring to Lexie?

Carter: When I worked for him he asked about my past job working for you, and your “darling daughter Lexie”…and then he added that she’s a gorgeous girl. Like it was some kind of sick and twisted infatuation. I didn’t think anything of it until I got that phone call and I recognized his voice and now I’m just nervous.

Reeves: No you did the right thing coming to me. I’ll have my men look into it. In the mean time go home to my daughter. I don’t want her alone. I’ll take care of everything else.

Carter: And by everything you mean?

Reeves looks at him

Carter: Are you ok?

Reeves stares at him intently

Lexie: Yea I’m fine, I promise. I just have to talk to you.

Lexie looks at Kelly tied up and unconscious on her floor

Reeves: When it concerns Lexie’s safety…we’re on the same team.

Carter rushes to the car to get home to Lexie

Carter walks into Lexie’s apartment and sees it a wreck and someone tied up. He rushes over

Lexie emerges from the bathroom pale and sweaty

Carter: What the hell happened?

Lexie: I came home to find her waiting for me…with this, (pulls the gun from jeans)

Carter: Are you kidding me? Wh-

Lexie: Didn’t you notice she never showed to your meeting? It was all a ploy to get me alone.

Carter: I never made it to my meeting?

Lexie: What? What do you mean? (starts to feel faint again)

Carter: Whoa…whoa are you ok?

Lexie: Yea I’m fine. I just think I have a bug or something, or maybe my nerves. I’ve been puking for the past hour.

Carter: That’s not normal,  (feels her forehead, leads her to the couch.) Here lie down.
I’m gonna call an ambulance.

Lexie: No no. How are you going to explain all of this.

Carter: Yea well I’m sure you didn’t count on my wife turning into a psycho and coming after you.

Lexie: Can’t exactly say that I did. But it happened and we can deal with it.

, we can, I’m gonna take care of you, whether you like it or not. (Carter picks up the phone)

Carter: Hi, I have an intruder in my house, she’s unconscious at the moment and is detained, but my wife needs an ambulance.

“Police officers and an ambulance are on their way.”

Carter leans over Lexie and sits next to her 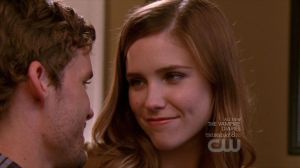 Lexie: Just to be clear…who were you referring to as your wife, exactly?

Carter: You. You really are crazy, (kisses her.) 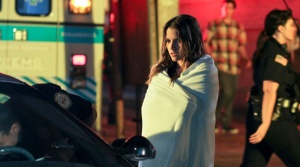 Then Carter and Lexie are led to another ambulance to get Lexie checked out.

** I take no credit for any of the images, all belong to their rightful owners.**

AND… to all you guys & gals out there, single, in love, married for years or in a relationship that is still unclear…HAPPY VALENTINES DAY!…enjoy with someone you love, no matter who it is! 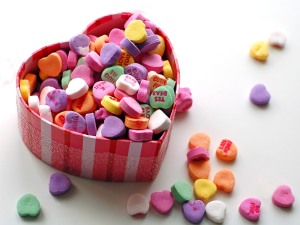