Something many may not know about me is that I’m kind of infatuated with zombies. My family is hooked on AMC’s  The Walking Dead, (if you don’t watch it…well…you should!) and every Sunday that it’s on, you can bet we gather around the tv and watch together. Usually it involves me and my brother screaming at the television and calling “Andrea” a big whore, (pardon my french…but if you watch it you’ll understand) because she sleeps with every single man who challenges Rick and the remaining survivors. Unknowingly of course, but seriously can someone really be that oblivious!

Anyhow… Moving on…Now that we’ve finally hit February, it’s only a matter of days until the second half of it’s 3rd Season hits our screens. When we left off, our favorite survival team was in quite a pickle, left entering a new world orchestrated by this devil of a “governor.” The survivors have lost many friends along the way, and now they’ve got to worry about whether or not they’ve lost one of their main front-men; Daryl, who has been taken (without their knowledge)… and well… for lack of a better analogy “thrown to the ”

Rick (a cop and the team’s leader) leads his people into this new world in search of two more of their own; Maggie and Glenn who have been taken and held captive. In their search, all hell breaks loose. Waging war on a newly found set of survivors is proving to be quite the ballsy task.

These characters I’ve mentioned are definitely my favorites, but there are some that have been killed off that I seriously disagree with (Dale, Shane,T-Dog, and “Whore-y Lori”…just a little nick name I’ve given her haha) and then there are tonsss of characters still living that I think are useless…case in point… Carol…she does nothing. And that blonde chick whose name I will never know because I just don’t care! Anyhow I’m super stoked for the new episodes to start, I think we’ve only got a taste of what’s to come. But let’s all agree, the best part of the show is all the awesome zombie kills and, I think it’s safe to say Glenn is responsible for about half of them, haha. He’s turned into such a major bad-ass!  All I can say is BRING ON THE ZOMBIES!!!!

**Inspired by the show….my brother and I had a “Zombie and Friends” Halloween Party this past year… take a look at the transformation…. (it’s pretty hysterical!) All actual party photos taken by “Zombie” Photographer Robert DeSantos Jr. 😉

I got this cool slashed neck piece and then poured blood all over my neck….guess zombie girl was on someone’s shit list…lol

P.S. My brother and I made a party promo video too…

My wardrobe consisted of a flannel shirt that I ripped and tore up, and then poured fake blood and coffee grains (blood & dirt) all over it, making it seem like I put up quite the zombie fight what with “rising from the dead” and all. Under the flannel shirt I wore an old white t-shirt that was covered, and i mean covered in fake blood, and a pair of old beat up skinny jeans and moccasins. Whatever she was a hipster zombie girl… those exist 😉 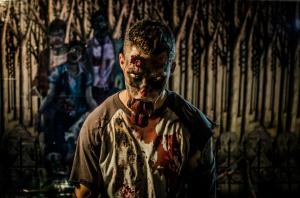 How freakin’ awesome is this?

I have to say all in all everyone had a really great time, our guests were totally game for taking really hysterical photos and just really embraced the whole zombie entity of the party, taking on the roles of their costumes as they posed for pictures, running from zombies, or fighting back. We had some Army brats home for the weekend, a Geeky couple, a Vampire-ress, a Lumberjack, a Cat, Dorothy and Todo stopped by on their way to Kansas with a Cowboy in tote, Waldo was finally found, even Spiderman and President Obama made an appearance. But the zombie siblings definitely dominated 😉  It was a great time had by many! The zombie experience was awesome, it was daring for me because I’ve never done the whole scary Halloween costume thing, so it was  a lot of fun, and worth all the prep! If you’ve never been a zombie…do it, it’s a blast!

And don’t forget to watch