So as my friend Lauren likes to joke, I am the only person in the world who watches

the CW’s Hart of Dixie… and you know what maybe I am..I’m a girl, I like all that corny shit. 😉

But hey it stars Rachel Bilson

Regardless of the fact this guy is on it, and well hey… I’d just watch it for him alone 😉

His name is Wilson Bethel, and he plays the character of “Wade Kinsella,” local bartender and well known

(Although in the last episode we found out that he

cheated on her when he got drunk one night.)  But I refuse to talk about that, because well I’m pretty pissed.

damn Wade, what the hell!!!

Any who… enough of that, the reason I brought this show up is because there was a song featured on last week’s episode that I fell in

love with. And I went on a search to find it! And when I did, I struck gold.

The song is called “These Words” by singer/songwriter Jill Andrews 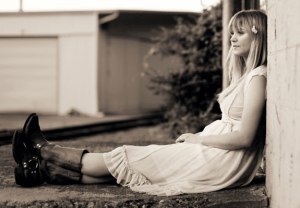 Look me up
When you’ve had your space
When you’re ready
To see my face
In a room where we both could be
Where somebody else
May be loving me
Would you ball up your hands?
Would you clench your teeth?
Would you walk away
In disbelief?
Are you ready to leave?

Read the rest HERE
***Jill also has an album out entitled The Mirror
I think what drew me into this song was the intro, the first few lines:
“Hold me up
Because I think I’ve fallen to you
While you’ve fallen out of love with me...”
They kind of just stuck in my head and I felt like I had to know who sang it, because the song urges you to listen. Her voice is very soft,
very sweet, but at the same time it’s heartbreaking, and in a way it makes you want to know why. Or at least I did, and once I found her,
and I watched her perform the song, I can safely say I got chills. I think for something so simple, and organic; just a few guitars, the
song really just gets to you. So once again shout out to Hart of Dixie for supplying me with a new musical interest…that’s where I first
fell for The Lumineers, when “Ho Hey” was featured on the show before it even got overplayed by radio stations, lol.
Well there ya go…check her out! Happy #MusicMonday!