So I haven’t done a fashion post in quite some time, and as my poetry mind is lacking inspiration for the moment,

I thought it might be a nice change of pace.

This week’s Wardrobe Wednesday is dedicated to a woman who makes simple pieces look glamorous,

that’s right I’m talking about the impeccable and most natural beauty: Sophia Bush.

The girl is truly breathtaking and sweet as pie, I know for sure, I’ve met her!

all other fashion images found on Google, i do not take credit for any!] 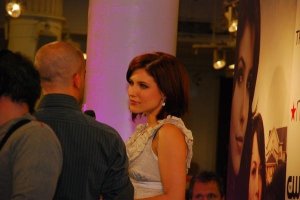 Sophia Bush; best known for her role as peppy meets angsty “Brooke Davis” on the CW’s One Tree Hill, even made her stride as a director, while acting and directing several episodes of the hit tv show. Over the years Sophia’s been in blockbuster hits like “Stay Alive,” “John Tucker Must Die” and “The Hitcher.”  Sophia is also quite the busy bee philanthropist, a woman who is bold yet classy in her efforts to change the world. Her most recent contributions include building schools for less fortunate countries with the organization “Pencils of Promise.”

To sum it up Sophia makes the whole 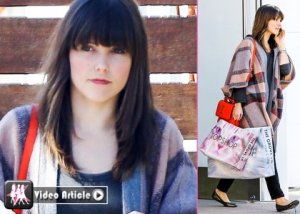 look effortless and fun, yet girly and chic!

Here are just a few of my favorite Sophia Looks…

I am in love with this look, the black crop top with the leopard highwaisted skirt paired with a bright green purse…to die for! So simple and summery, but doesn’t look like she’s trying too hard.

To me she looks like all she’s missing is a flower crown and she’s ready for coachella…Once again love the crop top with the highwaisted pants…and the print is so airy and simple yet funky when paired with a leopard flat! 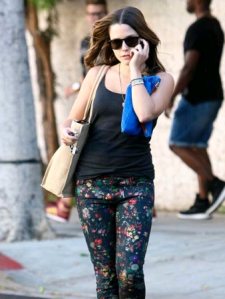 Now this is what I’m talking about when I say simple. She’s rocking a regular black tank and some printed pants. But they are subtle, a dark navy with a few bright flowers for a pop of color…perfect outfit for running errands or an friend’s backyard bbq! 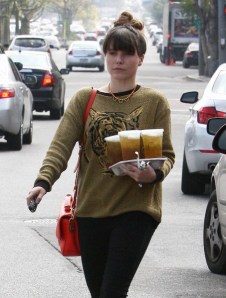 Now this is one of those typical celebrity shots…you know the “walking to the car with Starbucks” shot!…wearing something totally lounge but somehow looks glamorous in it’s own right…these shots I LOVEE! lol 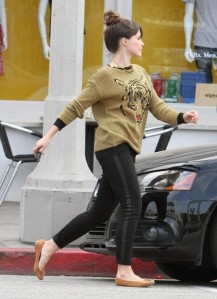 Must be pre- Starbucks 😉 but i just had to show the full outfit. I love that leggings and big sweater look, paired with flats and a big ole bun! That’s a definite go-to girl fav! P.S. notice how her sweater covers her a$$…yes ladies I’m referring to the fact that leggings are NOT pants…learn it live it love it

Now this just screams FALL to me, I’m a big fan of scarves, I feel like they keep you cozy and double as a fashion piece. And Sophia’s choice to rock a pair of jeans and combat boots make the look simple yet trendy

Sophia’s Black White & Red look is always well placed and well put together… She carefully chooses which staple item to make that bold red… whether it’s a purse, or a leather jacket, or a shoe…it’s always fashion friendly…and she isn’t afraid to sport some red lips either!

A girl after my own heart!

Here are two of my favorite Black White & Red Sophia Looks…in a way I feel like the second is an updated, more sophisticated version of the first… A 5 year style evolution of sorts! 😉

And here she is still looking young …but more mature, more womanly, in a funky black & white printed fitted dress (not as fitted as the above look) paired with clear sandals with red heels and red accent bows

That’s all for today’s #WardrobeWednesday

*Below are some photos of me meeting Sophia!*

Song of the day… Passion Pit’s Carried Away; Check Sophia out in the band’s video!

Bout to watch me some #Melissa&Joey tonight, because yes I am still

a Melissa Joan Hart fan, and I don’t care who knows it, she’s hysterical!