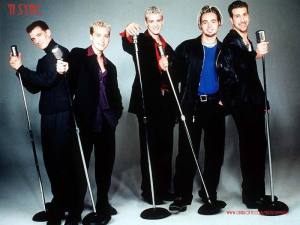 So let’s just say that when I woke up this morning I had no idea, what I’d be waking up to! Of course I open my eyes, and naturally I roll over and ignore the fact that my body has awoken, lol, we all do it! I play it off and try to go back to sleep, but then as usual I eventually end up on my phone scrolling through Instagram or Facebook.  I see this picture of a truck carrying a HUGE disco ball, and the caption reads “I wanna go where this is going.”

I thought it was awesome so I posted it on my account hashtagging DirtyPop, in reference to the NSYNC hit single of course. It was something that just made me think of them… disco ball…pop…NSYNC, it was like a “Pyramid” game show question, lol.

Anyway little did I actually know that a few minutes later, I’d be fangirling like a freakin’ psycho. I scroll and scroll and then I see someone post something about a possible NSYNC reunion at this year’s 2013 VMA’s! So naturally I comment my friend to check this site’s validity, we’re all in limbo wondering if it’s yet another media frenzied hoax, that threatens to break the hearts of 90’s girls everywhere.

But then I get a text from my best friend Roe, and she tells me she saw it on the news. At that point you know I had already been googling my ASS off! And low and behold that shit is on blasttt EVERYWHERE…. social media sites are going crazy, and #Nsync is trending on twitter!

#1 Justin is a leading nominee up for SIXXX Moonmen, so already it’s a big night for him! #getitboy

Video of the Year

“Mirrors” is brilliant it better win shit!!!! Otherwise I will riot! 😉

#2 It was just recently announced that Justin will be receiving the Michael Jackson Video Vanguard Award…which is a HUGE honor (making it an even BIGGER night for him) and no one is more deserving… Michael Jackson is a huge inspiration to Justin and Michael and Justin were very fond of each other, and performed together several times.

#3 Upon the news breaking that Justin would receive such an honor, last week MTV hits began running all of Justin’s Music Videos and some VMA performances, including the one where NSYNC performs “Pop” and is joined by the King of Pop himself during the song’s end dance break…and I thought to myself wow that was soooo dope, but I was sad on two accounts 1) Michael is no longer with us, and thinking about that always hurts, because I’m a huge fan of his music, and 2) NSYNC is no longer together. I caught myself imagining what it would be like if they reunited, how huge it would be…and how happy it would make me and other fans everywhere.

#4 News breaks and rumors circulate about a possible reunion…now I know that tends to happen a lot with the internet, Justin Timberlake can sneeze and it’s breaking news all over the place in a matter of seconds! It’s crazy the world we live in. But I choose to believe that there’s a reason for the rumors, there’s gotta be…to hype this all up and let it fizzle would be a disgrace! And will leave a lot of fans disappointed. Especially since they’ve been rumored to reunite multiple times before and there was never any truth to it.

*This is the scenario I predict (I’m hearing rumors that support my theory as well, so yay!) I think Justin’s gonna rake in them moonmen…and then the other boys of NSYNC will present Justin with the MJ award and THEN the legendary boy band will reunite in their first group performance in over a decade to perform either… “Pop” , a medley of NSYNC hits, or possibly perform one of Justin’s songs with him (although I feel like that’d be a slap in  the face, I mean the whole reason they aren’t a band anymore is because Justin’s solo career blew up! But all of them singing like an a capella version of “mirrors” would be dope, jus sayin’) OR last possible idea they do a Michael Jackson Tribute due to the fact that it’s a Michael Jackson named award. (i say if your gonna do it, do it old school and give the fans a true NSYNC show stopper!) 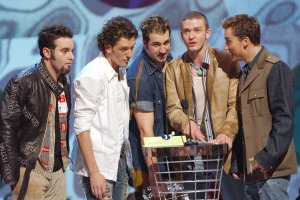 #5 Media reports state that at Justin’s Miami show recently, The boys of NSYNC were all in attendance with wife Jessica Biel and mom Lynn Harless watching from the VIP area… I mean they are rarely rumored to be hanging out together… a possible meeting to discuss performance ideas, maybe? :O **Photo Update 8-21-13…finally found proof!**

***However, I would just like to state the fact that I am still on the brink of sanity and I do understand that this “reunion” is most likely a one time thing, for the specified occasion. Justin just released his ridiculously brilliant 3rd solo album and just wrapped his stadium tour with Jay-z (which was out of this world by the way!) and upon the release of the second half of 2020 coming up on September 30th (hollaaaa) Justin is embarking on his own world tour. So yea homeboy’s gonna be pretty busy…but then again it couldn’t hurt to dream that maybe just maybe he’ll take the boys along with him…for all time’s sake Justin…you owe them…and you owe the fansss (afterall he did leave the band with a pretty rapid exit, giving fans little time to gain closure, yes i said closure, every girl has a relationship with their favorite boy band!!!) A girl can dream… and I will 😉

Now alls we need is a Justin & Britney Reunion and it’ll put me over the top! Come On!

They were really in love you can tell! Why else would his entire first solo album be about her, um hello! (#nohardfeelingsjess)

This is a Manip….but a girl can dream!

And um P.S. it’s at Barclays and let me just say Brooklyn’s where it’s at…I’m half about to go stalk that place (and shit!) 😉

I know I will be in one of two places… either stalking Barclays or home in front of my tv, popcorn in hand and ready to watch my man!

[I do not take credit for any images used!]