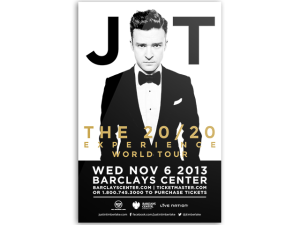 After countless failed attempts at getting tickets to last night’s opening night show for The 2020 Experience World Tour, at none other than Brooklyn’s Barclays Center, I finally pulled a Monica (“friends” reference); the good kind that is, and bought tickets yesterday afternoon, just in the knick of time. Just in enough time to get ready and head to the show!

I realized that the overpriced sucky side stage seats I ended up buying didn’t even compare to the sadness I’d feel by not being there. I had two choices; to sit home and dwell on the fact that I wasn’t there, knowing I would see him tweet Thank you’s to Brooklyn for a great night, and later see footage of all the amazing things he sang and did, and not have been a part of J.T. history, or put that graduation money I had been saving to good use. Obviously I chose the latter. 😉

And boy am I glad I did! I still can’t even fathom that I was there. I had seen him back in July at Yankee Stadium for the Legends Tour with Jay-z and I thought that was amazing, but this…this was something on another level all together. And it was what I like to call All Things Justin! (Sorry Jay Z you put on a good show, but Justin’s my man!) 😉

There were so many key moments where I thought to myself, I can’t believe this is even happening right now, Am I really here??? Did I really just buy these tickets today and I’m sitting here, rocking out to my favorite artist of all time. I mean it was surreal.

The set list was an amazing blend of all his greatest hits (sadly excluding any *NSYNC), but he also did a fair amount of songs from each of his albums. But the bulk of the material was from the most recent “2020 Experience” album, of course, and as it should be! I mean this is his new stuff and it is the 2020 tour! Duh? But Justin also knew he wouldn’t be able to get away with not singing some of that old greatness!

However, I have to say even though I feel as though I have this weird cosmic connection with the star himself, where I feel I’ve been a fan for so long that I have this way of knowing what he’s gonna say, or what he’s gonna do, or what he’s gonna sing, I have to say there were some definite surprises in last night’s show…beautiful beautiful surprises. He sang songs, I didn’t even think he would, and he also sang almost every song I was hoping he would! With the exception of my latest obsession “You Got It On” but there’s a whole year for that! MSG show I may just have to see about you too! 😉

In fact my girl Lauren,… (god bless her for dealing with my crazy insanity and frantic texts! ) was so surprised at the diversity of his set list and his music, she was like “It’s like he performed every song he ever made!” hahaha I am proud to say after last night she is a J.T. believer! Hollaaaa!

Right before Justin took the stage at around 9:45 (sucks to have to wait for a main act, but my god was it worth it!) with “Pusher lover Girl” there was a countdown, and I love a good countdown…it just gets the adrenaline flowin! And as he did he gave a big Brooklyn shout out! In fact keeping with the Brooklyn theme throughout the night he kept sayings things like “Did you come to have a good time tonight, Brooklyn!” “Are we having a block party?” and “You want some more, Brooklyn we’re not done yet!” Super cute!

Last Night’s Set list included… a 32ish song set (give it up for the man!)

And I’ve elaborated on the tracks to show you just how many key Justin moments there were throughout the night. That’s the thing about Justin he may not have had a big heart to heart with the audience like he’s done in the past where he makes little speeches in his concerts, but it was his first show, and I think he just wanted it to be a big party and let everyone have a good time. But even so, Justin is a people person and even when he’s cursing at the audience (you’ll see what I mean haha) he’s joking along and making you feel like he’s your hometown homie. Cracking jokes like “Hey I see you on facetime” waving to someone in the audience, and “Hey Jackie, Hey Jackie… I see you up in the back, you look beautiful tonight” lol. So… let me take you through this unbelievable set list…here we go!!!! (Wait STOP, if you weren’t there last night, and plan to be at one of his future shows….don’t spoil it for yourself…DON’T DO IT…

Ok I warned you…

Justin Tweeted this picture prior to the show adding “Brooklyn, u ready?!?”

5.) Like I Love You (I gotta say he’s come a longgg way from dancing in front of a seven 11 in a beanie and a leather jacket!)

6.) My Love (brought it in acapella and slow jazzed it and soon belted out “now drop that shit right-” and turned it up having Brooklyn singing it out as he danced it out…he’s seriously still got it, boy can movvvveeee)

8.) Strawberry Bubblegum (“can we mellow tonight Brooklyn…” Omg this song!)

13.) Cry Me a River (always a crowd favorite and worked nicely with the tie into Holy Grail! And had the entire crowd bouncing with him, yea my inner thug comes out big time whenever “Cry Me a River” comes on! Haha)

16.) Drink You Away (He brought the Tennessee kids up for this one “Hey baby…that’s what we say in Memphis…Hey baby” …Oh great I guess I gotta go to Memphis, find me a nice southern boy, haha… “What day is today…hump day… yea that’s right I just quoted a Geico ad, Fuck you.” Oh Justin you are just killing us over here!)

18.) Senorita (had the fellas and the ladies singing their given parts and clapping along)

19.) Let the Groove Get In—- (MAJOR HIGHLIGHT; the stage lifted and traveled across the audience setting Justin across the room to another smaller stage where he performed his next few songs. He added a little “Oh eh oh eh, oh eh oh oh ah, to Spanish inspired “Let the Groove Get In,” as the crowd sang along happily to the Gloria Estefan “Rhythm is gonna get you” intro… I swear it was like I was in Rio! He had us two steppin and clappin’ in no time, going onto say “I told you I’d see you, in the back!” That was seriously a G move! Props J.T., Props!)

21.) Heartbreak Hotel (Elvis Presley cover) (I was like aw shit!)

23.) Human Nature (Michael Jackson cover) “Put two fingers up for Michael Jackson!” (peace sign lovin…this I swear melted my heart and I was like Holy shit!)

24.) What Goes Around…Comes Around (acoustic) (walked over to the bar to grab a tequila shot and in typical J.T. fashion asked if he could drink with us and toasted to  New York “the greatest city in the world!” holllaaaa also went on to poke fun at his hashtag skit as he said #wasted #doyouworktomorrow #ihopenot hahaha)

26.) Take Back the Night (another crowd favorite and can I just say thank the lord that Barclays’ sound system got better! (it sucked when I saw Justin Bieber last year and sucked on the mtv vma’s as well!) But when the “and the horns say…” part came on I was like OMG this is my jam!)

28.) Poison (Bell Biv DeVoe cover) (ummm can I just say I freaked the F out! The cover song choices just escalated in greatness, And he’s still got them moves!)

31.) Mirrors (He freakin’ through his towel at the end…like whattt???? Whoever caught that Omggg you better treasure that shit!)

32.) ***And there was even a bit of a Kool & the Gang’s “Jungle Boogie” dance session somewhere in all of that! Haha, and an Earth Wind and Fire’s “Shining Star” snippet thrown at the end of “Let the Groove Get in” if I’m not mistaken (could have been another song, but after over 2 hours of Justin (as the show didn’t close out until midnight!) you get kind of  Justin drunk and he had me feeling good!!! So yea, lol.)

He didn’t do his typical say goodnight and then come back for his big finale bit he usually does, but having the night end with a huge crowd sing and dance along clapping like their hearts depended on it, sent us off with an image that will forever be remembered, as he shouted “you sound so beautiful!” as the crowd sang along to his hit single “Mirrors”. I think J.T. made everyone a believer last night, and as he exited the stage “Thank you Brooklyn, I love you, Thank you so much!” blew a kiss to the crowd… I had yet another mind blowing Justin Timberlake experience to add to my concert resume. I think it’s safe to say he’s going to be around for a long long time, he’s a one man show…a renaissance man at that, and their isn’t anything he can’t do and be great at. He sang (and sounded unbelievable! Might I add) he danced (danced his ass off, and looked good doing it), and joked around with the Brooklyn crowd… all in all he did make it a block party! There is just something about the moment when he puts the mic to the audience, and you hear everyone sing back to him, it’s an unbelievable experience as a fan, and I am sure for him as well.

So in a nut shell it was just that… an experience…opening night of his first world tour in 7 years, in Brooklyn, and I can say I was part of amazing Justin Timberlake history… so on behalf of Brooklyn… we thank you, Justin! Hats off…

So I didn’t take two many pictures this time, because A.) my phone ran out of space! ughhh B.) I just wanted to worry about enjoying this one! But here are just a few I did take! 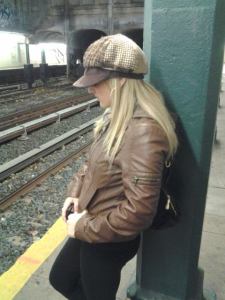 En route, to the night of a lifetime! 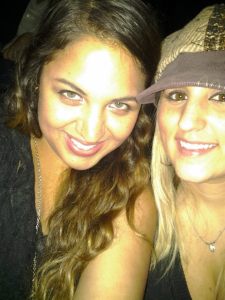 I made her a believer ❤

So he may look like a little peanut, but I don’t care I was just happy to have been a part of something so amazing!

Here’s a quick shot of the opening act; The Weeknd doing their thing, and as always, got my “hold up your cellphones” moment…I swear it just looks so beautiful!

And now for just a few shots Justin Posted…

he tweeted this picture adding “Thank you, Brooklyn” 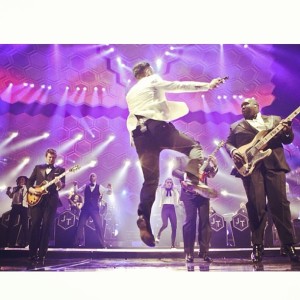 If you were there last night, tell me what you thought!

If you weren’t, get on it! He’s on tour until July!

One thought on “In recent Justin Timberlake fan girl news…”