So I thought I’d give this concert vlog thing another whirl. Let’s see how we do.

Last Thursday, on July 28th my best friend and I went to see Bethany Joy Lenz in concert. To say we have waited for this for along time would be an understatement.

We have been fans of Joy since her One Tree Hill days. As many of you may know Joy is best known for her role as Haley James Scott on the hit teen drama. And as our obsession with the show grew so did our admiration for Joy and her undeniable talent.

She is without a doubt one of my greatest and longest running inspirations. She hasn’t ever really been on tour in New York- well since the One Tree Hill Tour that my best friend and I tried to get tickets for but failed, (I wasn’t the ticket savvy queen I am now.) I have never been able to see Joy live. So back in April when she posted a concert poster, I freaked out when I saw a New York date and swooped up two tickets for me and my best friend to give her as part of her birthday gift!

Outfit of the Day + Hair & Makeup 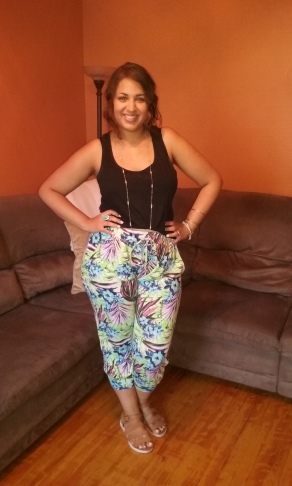 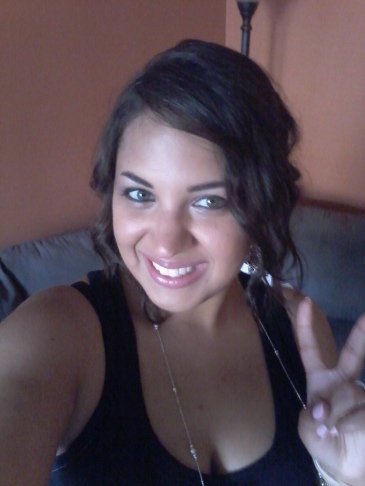 The concert was held at Highline Ballroom in New York City. And it was probably the coolest concert venue I’ve ever had the pleasure of attending. It is so cozy, the lights are dim, there is a ground floor and a mezzanine level. The ground floor had some tables and booths but were reserved seating and the rest was standing room only.

Me and my friend are grandmas with big ole purses so we wanted to catch a good seat, so we rushed up to the mezzanine level and grabbed ourselves a nice little booth perfect for the two of us overlooking the stage. At the candlelit table you were asked to order a minimum of $10, however the ballroom comes fully stocked with a dinner and drinks menu.

We ordered two glasses of rose (oh so fancy), some mushroom sliders, butter lettuce salad with grilled chicken and fries. Everything was delicious. Not to mention that our floor had it’s own bathrooms too! So everything we needed was at our finger tips! We even ran into some family friends which we were able to share our fangirl experience with. The whole night was amazing, the show, the venue. It was such a great time and the ambiance gave off great vibes. Intimate shows are so much more soul satisfying. Artists talk more, they tell you stories. It’s beautiful. And you don’t have to deal with a crazy, loud, crowded concert hall.

We watched the whole show in sheer awe of what was actually happening. Sometimes I literally would just scream or make this face at my best friend-

-because I just didn’t know what else to do, I was that excited. When you experience something you’ve always wanted to, you kind of lose yourself. I certainly felt like I was living an out of body experience at times throughout that night.

Joy was amazing; she sang an array if folk/country/soulful songs. Some I knew, some I hadn’t heard, but either way it was moving and she is pure talent. 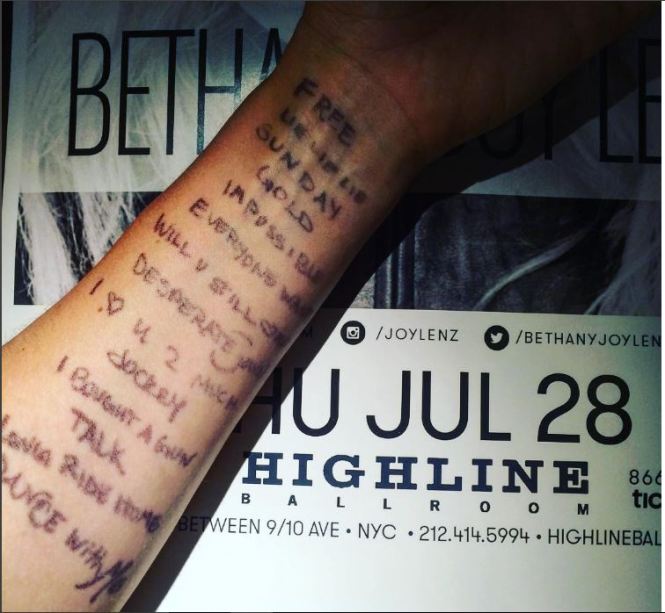 I had a mission that day-to vlog my experience. I love to take pictures and video, I love to document my life, so that I can look back on things and remember. I’m extremely sentimental. However, as I literally sat there trying to record every song, I felt like I was watching the concert through a screen. This concert that I had waited so long to see, this person who I have in some sense idolized for over a decade. How could I let myself not be in this moment. 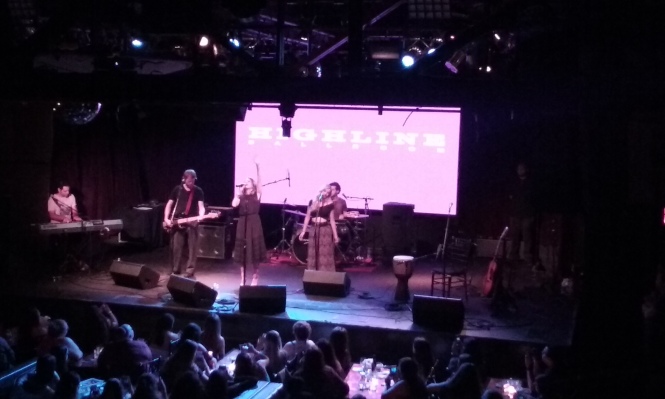 So as those thoughts crept into my mind, Joy said the thing I needed to hear. In the video you will see how she explains how technology has gotten to all of us, including herself. So at her shows she asks for her audience to put their phones and cameras down and to just “Be Here With Us.” I did my best to do so, I’m only human and I certainly filmed and took my pictures, but there was a chuck of time between when she asked to when the “phone song” came on that I had definite moments where I was able to disconnect from the digital and relish in the present moment, and take in the whole world of wonder that was around me. Something that is so difficult for this generation to do.

So let’s get into the fact that WE MET BETHANY JOY LENZ. I have to be honest, it wasn’t planned. When I had bought the tickets there was the option for a meet and greet, but it was quite expensive. I internally hoped that there would be an alternate way to swing a meeting because the venue was on the smaller, more intimate side. I must have had some good vibes swinging that night, because the minute I went down to check on the merchandise and memorabilia being sold, I was told that something was already sold out. I looked at the girl behind the table and asked “Oh no what did you already sell out of?” She said they just got word they could sell more polaroids. I asked her what she meant, when she told me that for $35 you could meet Joy after the show and take a polaroid picture with her and she would sign it. I was dumbfounded for a hot second. Is this real life? Is this opportunity literally within my grasp?

“Do you take credit cards?” I asked quickly.

“Oh my god, Ok, I’ll take two,” I say whipping my credit card out and handing it over.

“My best friend is upstairs and she’s going to freak out when I tell her.”

So I rush up stairs, internally freaking out and sit across from my best friend.

“Oh my god you’re gonna die when I tell you what just happened?”

As I told her the whole rundown, she streaked and hugged me.

This was going to happen.

After the show, we waited online to meet Joy, we strategically placed ourselves toward the end of the line, so that there wouldn’t be people rushing us off quickly. The audience was quite the mix, but there were teens there. A lot of teens. The way I describe it – “the Netflix generation.” You know the girls who fangirl over One Tree Hill, but didn’t actually live through it while it was on the air. Waiting week to week for new episodes, or waiting for winter hiatus and summer breaks to pass while we waited to find out if Haley and Nathan would get back together. It was safe to say that we were the old ones in the crowd and you know what it was beautifully nostalgic. I chatted with the littles and told them to breathe and stay calm. We joked and it certainly made the time pass nicely.

When it came our time to meet Joy, I was strangely at ease. Considering I balled my eyes out when I met Sophia Bush years ago, I’d say my behavior while meeting Joy was a major improvement. I guess I just realized that she’s a human being made of skin and bones just like the rest of us. I guess I’m growing up.

She gave us hugs and we took our pictures. 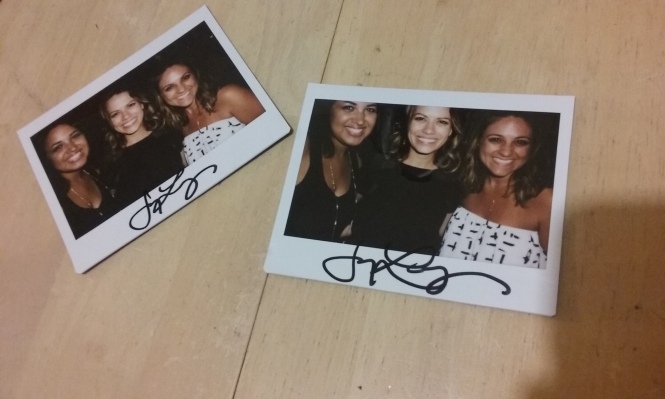 I turned to her and told her that we had been waiting to see her in concert for years and when I finally saw she was going to be in New York, I knew we had to go. And that the show was so amazing.

She smiled saying “Thank you so much.”

After we posed for our pictures she signed our polaroids and we made our exit, but not before I turned to say bye and blew her a kiss. Haha. In hide sight, it was kind of weird and awkward, she didn’t exactly reciprocate. Haha. The thing is it’s kind of a reflect for me, to blow a  kiss to a friend when I’m saying goodbye. I do it all the time, and I clearly felt like she and I were besties so it just fit. 😉 And just like that a childhood dream came true.

Anyway you know what they say…”Never meet your idols, because it’ll never measure up to what you have in your heard.” That may be true. The meeting was quick, and Joy certainly seemed exhausted and kind of ready to fall asleep. But she still stuck it out and met all of us, posed for pictures and signed autographs, it was a pretty sweet deal. And she was still her sweet self. The rest is just me overanalyzing. Haha. Until next time, Joy. Until next time.

*All photo/video content (excluding the set list pic, concert poster, and Zac Efron gif) belong to me and my best friend. *