For festival goers it’s a time to douse yourself in buckets of glitter.
Body jewelry, funky fashion and stellar Instagram pics.

But for those on the other side of Instagram, well, let’s just say for me, there’s always a bit of fomo. (Fear of missing out.)

In many ways, I feel like I’m a hippie that would fit right in there. Not in the sense that I’m overly impulsive or that I love the outdoors. But in the sense that I’ve always been attracted to flower crowns, tie dye, and peace signs. Deep down, I have a bohemian soul.

Which is basically Coachella vibes.

It’s more so the heat and the desert that I don’t think I could vibe with. But I do love the funky fashion. I’d definitely go all out if I ever were to attend.

Needless to say, this past weekend was Coachella weekend 1. And the rumors began. 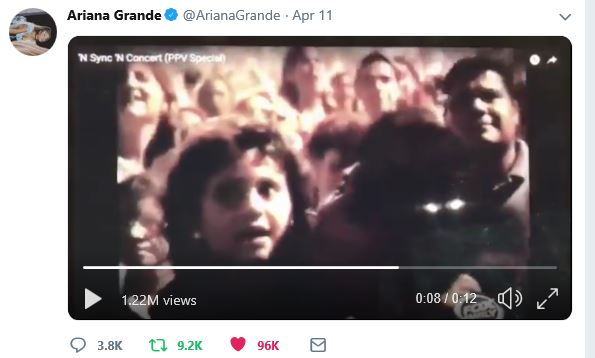 Ariana posted a video of *NSYNC in concert, as she stands in the crowd held by her mother as a little girl. 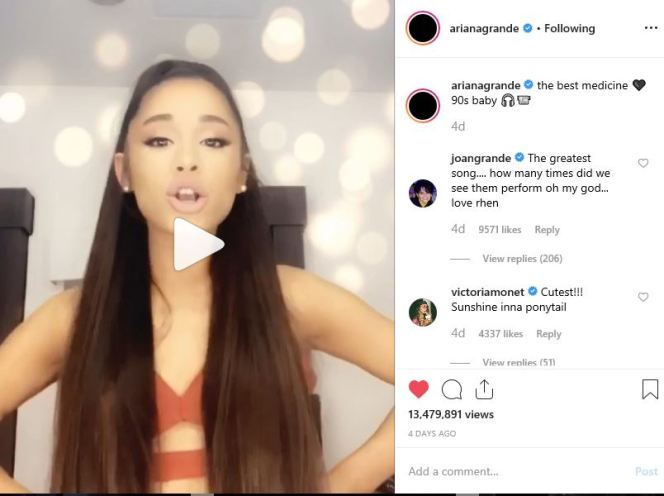 As many of you know. I am a COMPLETE and TOTAL *NSYNC Fangirl. This 90s boy band was and still is my jam. And so when I heard Arianna Grande’s new song “Break up with your girlfriend I’m bored”…I instantly recognized her sampling of *NSYNC’s “It Makes Me Ill.” A song off their 2nd album- No Strings Attached. Man that album was epic. I saw them in concert for that album. My first and last *NSYNC concert. Well hopefully not my last. 😉

Rumors of NSYNC coming to join Grande during her Sunday Night Coachella set started with a few slick tweets.

And I knew it was happening. It was very flashbacky to when they were rumored to join Justin Timberlake at the 2013 VMAS. SPOLER ALERT-they did. But I kind of like to block it out, because I was so sad, they were only given a few short minutes. My feels were hit hard.

So I knew something was going to go down. And conveniently enough YouTube was streaming the event live. So I got to partake in #Couchella. 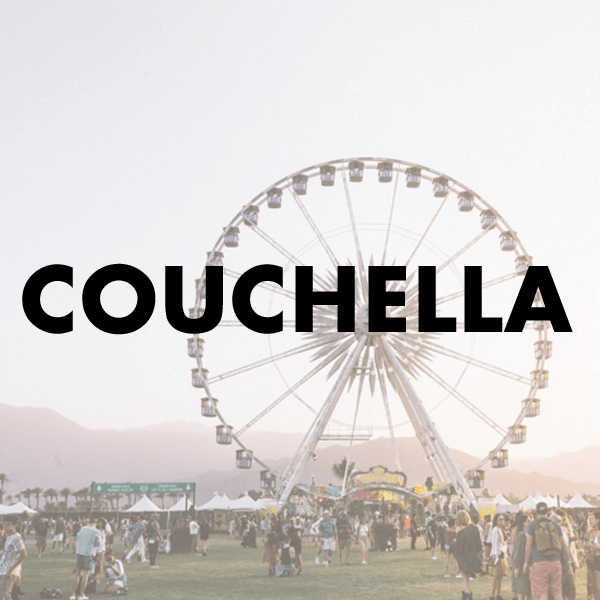 Grande took the stage opening with “God is a Woman” and “Bad Idea.” Then early in her set, she brought 4/5ths of *NSYNC out to join her yelling,  “I’ve been rehearsing my whole life for this.” JC, Lance, Joey, and Chris took the stage. I figured Justin wouldn’t show, considering he just wrapped his 115 show Man of the Woods tour the day before. Part of me wants to call him a brat. But the other part knows homeboy needs a damn break! 115 shows bro! 115! According to TMZ (super credible I KNOW! 😉 He was just unable to align his schedule with them to rehearse.

The guys joined Ariana singing their “It Makes Me Ill” portion of her song and then they performed “It’s Tearin’ Up My Heart” complete with synchronized dance moves! THAT CHOREOGRAPHY! 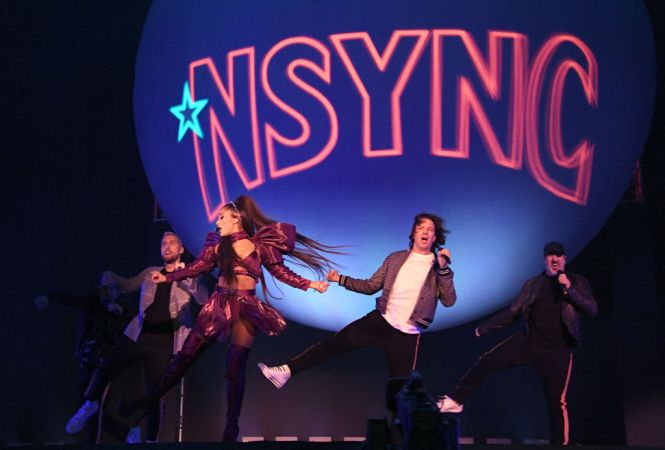 Ariana, I have to give you props girl, you held your own! And it was epic! Those guys still got it. And in typical *NSYNC fashion they all had matching pants and color schemes. MY HEART! I TELL YOU! THESE BOYS HAVE MY LITTLE FANGIRL HEART! I just realized I never really blogged about the recent *NSYNC news within the past few years…I guess this is kind of turning into an all around *NSYNC update. But you bet your bottom dollar, my socials hear all about it on the regular. So please follow me on instagram and twitter for more regular interactions and updates! 😀

In typical JC fashion he waved to the crowd as they all started to leave, and he said, “Thank you Coachella this has been a dream of ours.” Or something to that affect. I can’t find a DAMN VIDEO to rewatch. And I was an overly tired (it was like 2am on the east coast!) and frazzled fangirl last night. Not to mention the picture/audio/lighting was kind of a hot mess via Live stream.

As the exited the stage, Joey shouted, “thank you see you next time.” NEXT TIME! GUYS…he said next time!

Ariana laid on the stage, as she said, “ok I can die now.” LOLOL. We feel you though.

Grande went on to perform a 90 minute set including more guest appearances by Nicki Minaj, and Diddy. Now I’m not like her biggest fan or anything, but she seriously threw a damn good 90s throwback party. She even played of her old jams from her earlier albums, which I loved!

Hats off, Grande. From one fan girl to the next, thanks for reuniting the band for a night.

Also that night gave us these…these pics are slaying me…

[All images are collectively from Ariana, JC, Lance, Joey, and Chris’ social media accounts. I do not take credit!]

Anyone catch that “One more time?” comment Lance left on Ariana’s Instagram. Could it be they guys are returning to perform again with her this weekend at Coachella. Probably Not. Lol. Cuz well, it’s Easter. Time for Fam time! 😉

And low and behold he noticed! My heart got so happy seeing him acknowledge the performance! And seeing all the guys seeing he acknowledged it and chatting in the comments! 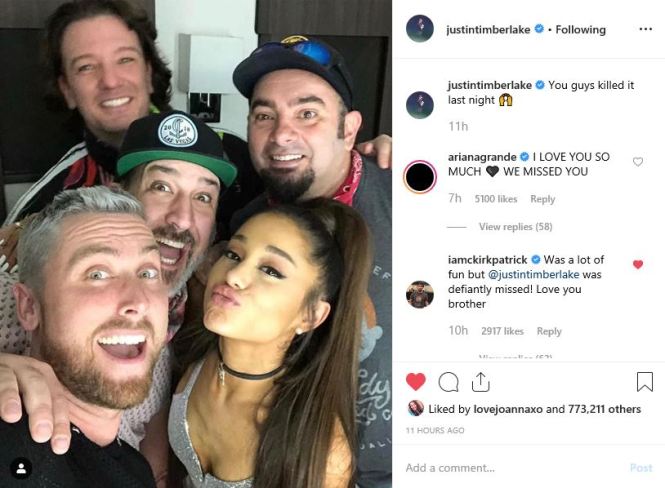 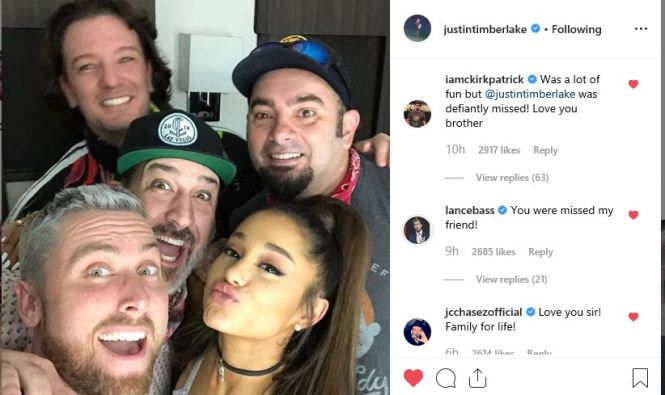 Love seeing these guys together and supporting each other, it’s my favorite thing.

Lance Bass talks how the performance collaboration came to be…

Last time we had our boys together was around this time last year; (April 30th- “It’s gonna be may” day to be exact) to receive their star on the Hollywood Walk of Fame. And it was a freakin’ magical time. I watched the entire livestream like a giddy little school girl! 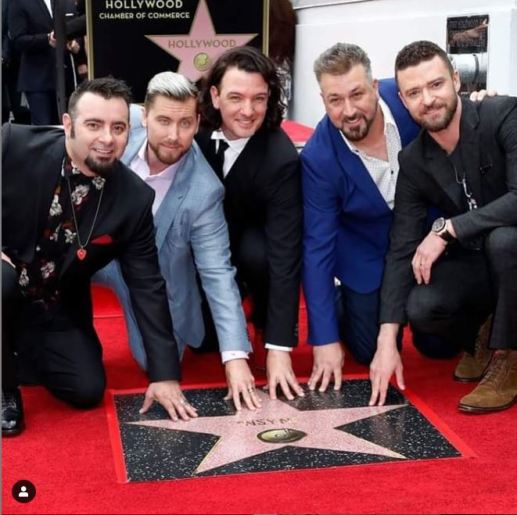 One Year Anniversary Coming Up! 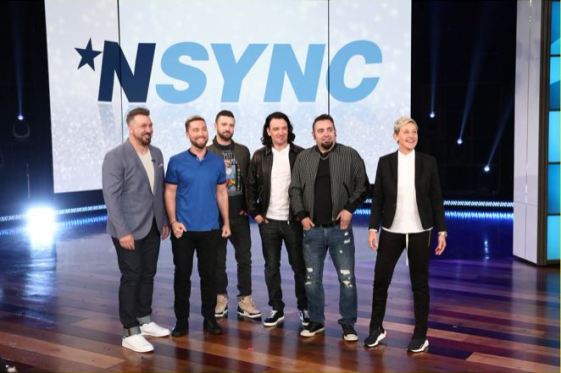 Oh yea THIS happened too! JT brought the guys with him!

Not to mention the guys kept releasing new capsule *NSYNC merch last year. I totally bought t-shirts! They even had a pop up shop in LA…Man if I lived in the area, I would have moved mountains to get there. Lance also just produced a documentary called The Boy Band Con- The Lou Pearlman Story. I haven’t seen it yet, but I know JC, Chris, and Joey are all featured in it. All of this gives a fangirl some hope. Yup…still waiting on that official reunion album/tour announcement. Don’t they know the universe is just waiting for it. I mean even Lance Bass recently said-

They really do seem like they genuinely love each other and wish the best for each other, but I also think the are just waiting for the perfect time to come back. I blame JT, maybe now that he’s back from a crazy hectic tour, he could hang out (in the studio) with some old friends.

Ok ok, sorry. I know I rag on JT for being the reason *NSYNC hasn’t reunited, but make no mistake that dude is my homie. I love him. I support him. I’ve seen every show, bought every record. I’m in it. I’m his fangirl just as much as the band’s. Much love for all 5 guys!

Holding out for hope, guys.

*I do not take credit for any images, videos, music, clips, used.*