And anything else that makes women believe in the brilliance of their minds & bodies. 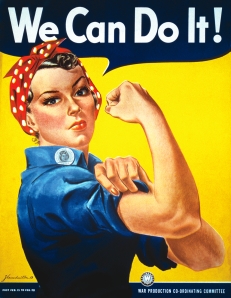 It’s no secret to those who have kept up with this blog or to those who know me personally that I am someone who not only believes in feminism, but also respects it. I think people get the wrong idea when, someone says I’m a feminist. They think right away “oh god, here we go, here comes the rant. She hates men.” And the truth is, that’s just ignorant thinking. Feminist simply believe they are to be treated equally. To be treated as a human being. I can’t tell you how many times I have seen men (both men I know personally and men I don’t know) ask their wives or girlfriends to make their plate of food for them or get them a drink, etc. And that’s all well and good if the woman chooses to do that for her husband or boyfriend, by all means that’s her choice. And doing it doesn’t make you any less of a woman. But it should be appreciated and not just expected of her. What gets me the most, is what is he doing at that moment that is so catastrophically time consuming, that he can’t get his food himself. And it’s usually nothing. He just expects to have her do it for him, because he simply doesn’t want to do it himself. I’m sorry but he has legs and hands and can do it himself. #SorryNotSorry. I often joke that my future boyfriend is in for a rude awakening, because I don’t put up with that crap! It may sound crazy to men when I say this, but that little act can feel demeaning to a woman; it’s as if you think that’s her duty, or her place in life. And I swear if someone says a woman’s place is in the kitchen….oh you will feel my wrath. I understand in the older days that’s how things were. And I’m sure as a wife you want to take care of your husband and cook for him, especially if he’s been working all day. But guess what there are working women out there in the world too. And they still work full days and come home (most likely to a house full of kids) and also still cook dinner and clean and keep a houseful of people in tact. So I ask you men out there, why haven’t YOU made your wife a plate, or cooked dinner for her. Let’s be clear I realize their ARE men out there who do, and I don’t want this to be taken out of context and to be thought of as me bashing men. That’s not what this is. But this is something I’ve noticed and it’s something I felt I wanted to address. And for the men that do reciprocate the gesture. I truly respect and admire that. Your mothers would be proud! Because YOU get it. YOU realize that times have changed, and will continue to change. Hey who knows maybe men will be the ones having the babies in the *Utopia* future. haha I vote all women start asking men to make their plates and see how they like it. Who’s with me? 😉 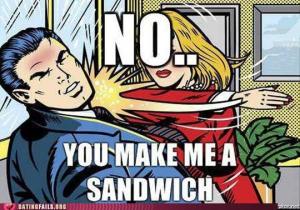 So now I bring you just a little playlist to get you happy and dancing.

Enjoy Ladies, you deserve it.

Order In Tonight, Kick Your Feet Up, Let Dad “Watch” The Kids [isn’t that a funny thing to say, we always say it but in reality are they not HIS kids too! Give me a break, it ain’t babysitting if they’re YOUR kids too Homie, haha.] Pour Yourself A Glass Of Wine, and Feel The Good Vibes Of The Music.

Because you are a woman and should be damn proud of it!

“Can’t Hold Us Down”– Christina Aguilera

“Wanna Be”– The Spice Girls

“Mr. Know It All”– Kelly Clarkson

“I Will Survive”– Gloria Gaynor

“Set Fire To The Rain”– Adele

“I’m Not A Girl, Not Yet A Woman”– Britney Spears

When in doubt. Dance it out.

*Notice it says (Part 1) because there’s a LOT more where this came from.*