So as you can probably tell from my last post, I’m having a difficult times believing that Glenn has died on The Walking Dead. And with all the theories and speculations and that cryptic message show runner Scott Gimple released to The Talking Dead’s Chris Hardwick, I’m just so uncertain that what we saw on screen was all there was to the story. I think there’s more. So here’s my theory. 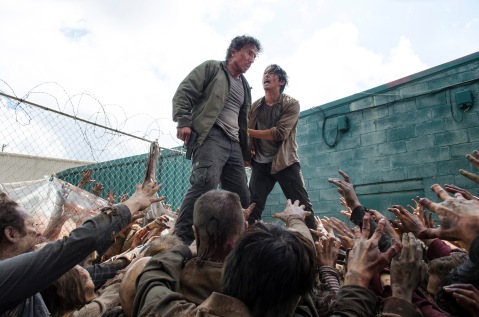 Yes the more I watch the scene, the more I think Nicolas’ body fell on him sideways and is shielding Glenn from becoming walker bait. And the blood and guts you see are indeed Nicolas’ intestines and such…

I saw a meme out there that made me laugh it said something like “Psst, hey chill out he’s alive, your intestines aren’t in your chest.” Haha. Has a point, no?

And Glenn’s reaction is just from fear and sadness. Even though Nicolas was someone who Glenn -let’s be honest- someone he hated. Glenn is still Glenn and he feels everything. He feels every loss of human life. In fact it’s been recently discovered that Glenn is one of the few characters on The Walking Dead that has never killed a human being. That fact totally skated by me, considering I totally see Glenn as a badass. He does what needs to be done, and he knows the danger behind this world and he knows when he has to be cautious of someone. But he has a heart of gold when you really think about it.

It’s possible he was able to wiggle his way free and hide under the dumpster for cover. It is literally his only option for safety considering the walkers are coming from all angles.

But how the hell can he get out of this crazy herd of walkers unscathed?

Chances are he won’t.

Meaning that he probably got bitten on some kind of expendable part of his body. I’m thinking a hand, arm, leg, or foot. Something that he could chop off and still go on living. Although I think leg and foot would be way worse and the leg would be way too Hershel. But this part of my theory leads to a connection to what Gimple said that we may see “parts of Glenn.” Body parts left behind, for someone to find and think he’s gone. Which is ok. We can handle that. We’ve seen it done before and characters still lasted for quite a while. RIP Hershel. RIP Merle. But Glenn will show up in some epic reveal! Hell yeah.

Then Michonne noticing something is up, because let’s be honest home-girl has some wicked instincts and she follows them. She will go looking for him, and find him as they both circle back and save Rick’s trapped ass. 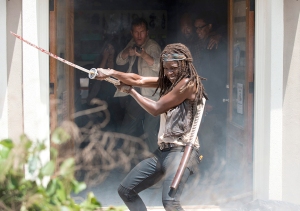 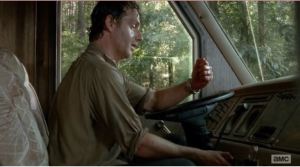 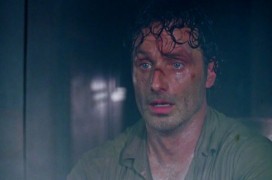 Let’s be real that would be kind of dope. Glenn saving Rick from the RV of doom (with one arm like a boss), much like he saved him back in Season 1 from the tank fiasco.

I wouldn’t be surprised if Daryl magically shows up too, cause well he shines in these moments.

I just think that Glenn has tried to be like Rick and get to the point where he can leave someone behind, or shoot someone point blank because they cause a threat. But he managed to take it back and keep his moral compass intact. Damn Damn Damn. As Chris Hardwick always says, you never want to be the moral compass of this show, because then you end up dead. I don’t believe that’s the case with Glenn. Glenn isn’t naïve about this world. He has a keen conscience and hell of a right hook. 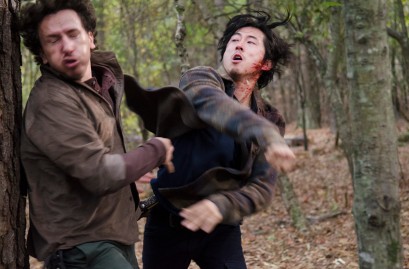 I think it would be really lame of the show to end Glenn’s story here. I think they have so much story left to tell. Glenn’s arch has been about him becoming a leader, a man, a husband, a caretaker. The arch could do a complete 180 if they allow Glenn to live. Think about how much death Glenn has been witness to, think about the images he has to suffer and relive over and over again. Losing Dale the way they did, Noah getting ripped from his grasp and torn apart right in front of him knowing there was nothing he could do to help him, and now Nicolas who literally shot himself I front of Glenn and then Glenn has to have his body be ripped apart on top of him, mirroring his possible faith.

I think it would be amazing to see Glenn make that transition toward who Rick has become. Some may say he’s crazy or cold. But he’s lived this life, he knows the risks, he knows the stakes. I think Glenn knows them to but he approaches things differently, which makes him him, and which makes him different from the other leaders in the show. I think it’d be interesting to watch him attempt to deal with all of this. I think it would make for some amazing character development. And would also make for some really deep, raw scenes between him and Maggie. Considering Maggie has suffered so much loss herself. 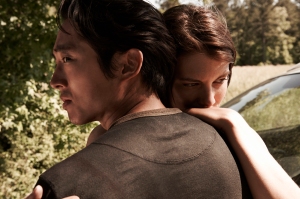 He can’t die. He just can’t. It doesn’t make sense for the show. So Scott Gimple, I ask you is the shock value of a possible Glenn death really worth risking the possibility for an amazing story arch for Steven Yeun’s character? No. That’s what I thought. I think you’re messing with us here and if you indeed are, and Glenn is alive (and you KEEP him alive, none of this he survives only to be killed later on this season) then I will tip my hat off to you and say YOU GOT ME. And that was one hell of an epic fake out. 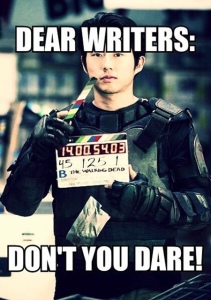 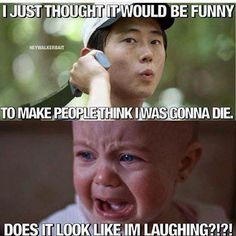 Sunday’s episode is 90 minutes long, fingers crossed that I can come back with some answers more to my liking. Because Glenn dying on The Walking Dead is no laughing matter and I think I speak on behalf of the fandom when I say it is unacceptable. And to those saying if Glenn lives the show will lose credit, I say the have more to lose killing off a character everyone loves. Nobody is going to say “Oh my god this show is so stupid why didn’t they just kill Glenn.” We all love you Glenn, we want you around for a long long time. 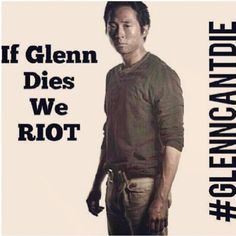 *I do not take credit for any memes, images or gifs used.*